PASSENGER Rail Agency of South Africa (Prasa) has confirmed it expects its new Vossloh Afro 4000 diesel locomotives to enter service on long-distance mainline passenger trains within the next two months. 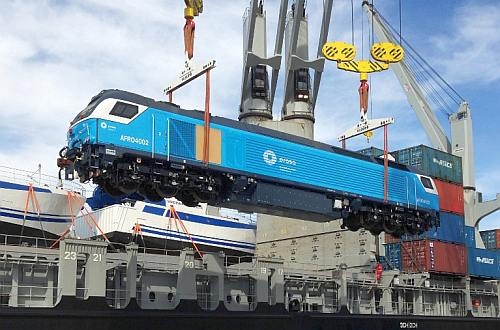 Prasa has recently accepted a further four of the six-axle locomotives, boosting the number of units delivered so far to five.

The locomotives arrived on the heavylift vessel Bright Skye in Cape Town last month and were met on the quayside by South African transport minister Ms Dipuo Peters, Prasa officials, and the first locomotive, which was used to transfer the new arrivals to Prasa's main Cape Town workshops.

The locomotives are expected to enter regular service from April 1 once initial testing has been completed, a Prasa spokesman told IRJ. At least one of the new units has been used to haul a test train as far north as Mahikeng in North West province.

Prasa has rejected rumours that the new locomotives exceed the South African loading gauge as "baseless." Transnet Freight Rail, on whose network Shosholoza Mey's long-distance train operate, said that Transnet technicians were also being consulted during the testing phase.

Prasa has ordered 20 of the locomotives through Swifambo Rail Leasing to address a critical shortage of motive power for long-distance Shosholoza Meyl services. A further 50 EuroDual electro-diesel locomotives have also been ordered as part of the €250m contract, which was awarded in October 2013.

The next shipment of locomotives is due to arrive in Cape Town at the end of April.