The first of six shunting locomotives has been delivered to a Russian mining operation. 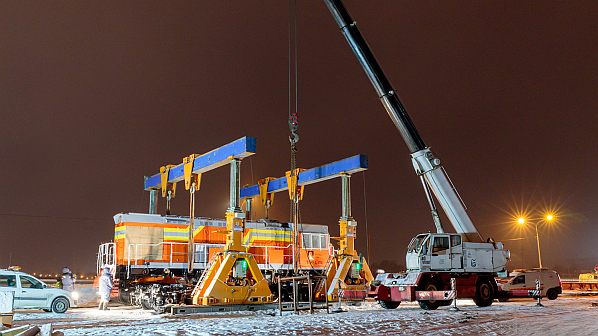 The first batch of locomotives was shipped from Russia in December.
Photo Credit: Sinara.

A contract for six four-axle 882kW locomotives with hydraulic transmission was signed in September 2021 and they will be used by a west African plant of the Russian aluminium company Rusal, which mines and exports bauxite. They are designed for shunting operations on the standard-gauge line.

The first delivery consists of three locomotives, and these left Lyudinovo Locomotive Plant at the end of December. The units are taken by road transport to the port of St Petersburg from where they are shipped to the Guinean port of Conarky.

The second batch is due to be shipped in the first quarter of 2022.

STM has fitted a multiple unit operation system (MUO) to the CBK locomotives which means when several are coupled together on one train the traction motors on all of them can be controlled by one locomotive. This increases acceleration, provides a reduced axleload and improves reliability if there is a failure as the train can recover itself.