SOUTH Africa’s public enterprises deputy minister, Mr Buleani Magwanishe, marked the completion of the first phase of Transnet’s project to increase capacity on the heavy-haul coal line between the Waterberg district of Limpopo province and the port of Richards Bay, KwaZulu-Natal, on July 14. 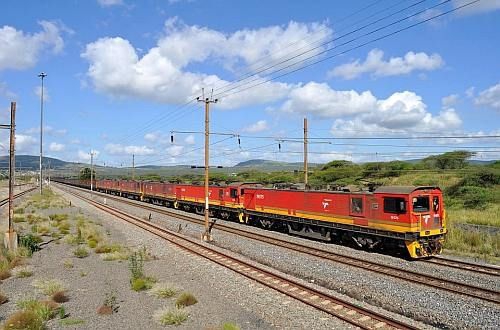 The project entailed the construction of a 1.8km-long passing loop at Matlabas, enabling 100-wagon trains to cross without disrupting the operation other trains on the line.

The Matlabas loop could previously only accommodate 50-wagon trains.

Rail capacity between Lephalale in the Limpopo province and Richards Bay coal terminal has increased from 400,000 tonnes to 2 million tonnes of coal per annum since the completion of the project.

The project is key aspect of Transnet’s Rand 21.8bn ($US 1.47bn) plan to increase rail capacity on the export coal line to 81 million tonnes over the next seven years. The loop marks the completion of the first of a five-phase plan.