SOUTH Africa's minister of transport, Ms Dipuo Peters, was among the guests to attend a groundbreaking ceremony for a new Rand 928m ($US 59.4m) railway vehicle manufacturing plant and maintenance facility at Dunnottar, 50km east of Johannesburg, on March 4. 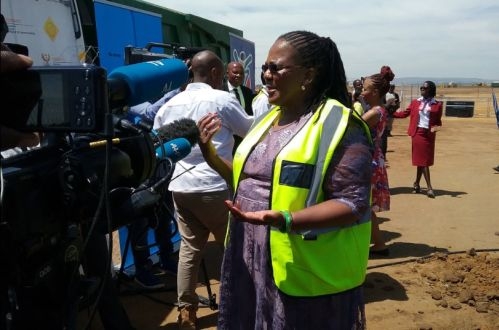 The plant will initially construct 580 six-car Xtrapolis commuter EMUs of the 600 ordered by Passenger Rail Agency of South Africa (Prasa) from the Gibela consortium of Alstom and its South African partners Ubumbano Rail and New Africa Rail in October 2013.

The deal, which is worth €4bn, included the establishment of the plant which will create 1500 direct jobs, of which 99% will be South Africans, and is expected to create approximately 6500 direct and indirect jobs over the next 20 years.

The 720,000m² facility will also include a 1.2km test track for the dynamic testing of trains up to 132km/h, while 700 people will work at an adjacent 40,000m² component manufacturing plant which will supply the main factory.

The first 20 trains from the order are under construction at Alstom's Lapa plant in Brazil with the second delivered earlier this week. Construction is expected to shift to South Africa when the new factory opens. To date 110 South African engineers and 170 "artisans" have undergone training in Brazil and Europe, with 1.7% of the total contract value going towards skills development. In total 19,500 people are expected to receive training at the facility to help them secure work in the rail industry.