Much of the great and the good of Britain’s rail industry gathered for Britain’s Railway Industry Association’s (RIA) annual conference in London on November 4 and 5. IRJ was among them. 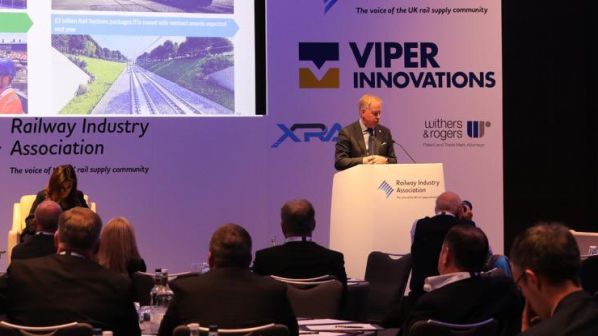 HS2 Ltd CEO Mr Mark Thurston there has been strong interest from overseas in the British project.
Photo Credit: RIA

IRJ at RIA Annual Conference 2021: THE CEO of HS2 Ltd, Mr Mark Thurston, has urged the railway supply chain to get behind the HS2 project and become an advocate for the way it is creating the skills and jobs that will define the future of the British sector.

Thurston said it is difficult to do this on a scheme where delivery is still 10 years away, but he thinks Crossrail, the new cross-city line in London which will finally open in 2022, will show that building 21st century railways in Britain is a worthwhile exercise.

“We’re a small place globally, but I have been fascinated by the amount of overseas interest there is in what I am doing,” Thurston said. “The general consensus is that when the Brits build railways they do it really well. And that has been proven, because we’re still using a Victorian system. Post-Brexit, we need to recognise that when we put our best foot forward as a sector on a project like this, it chimes internationally.”

Responding to a question from IRJ to provide clarity on the cost of the project, Thurston said the budget for Phase 1, the 225km line between London and Birmingham and Lichfield, is £44.6bn. For Phase 2A, between the end of Phase 1 and Crewe, the range is £5.2-7.2bn. Future budgets for Phase 2B from Crewe to Manchester will not be confirmed until they come out of the Transport Select Committee. However, Thurston said estimates of costs in excess of £100bn “are not numbers he is familiar with.”

Thurston confirmed that construction is progressing on more than 300 sites across the route and that 20,000 people are working on the project, including in organisations that make up the supply chain. Tunnelling of the first two 16km tunnels of more than 100km required for the project is underway beneath the Chiltern Hills. Thurston added that a second logistics hub is set to be established at Calvert “soon,” which will interface with work on the East-West Rail project between Oxford and Bletchley.

“Moving material by rail is going to be very important, because of both the pressure on the rail network as well as the road network,” Thurston said. “We have to shift during the civil programme for Phase 1 somewhere approaching 55 million tonnes of muck. That is probably three or four times the amount of material that came out of the Crossrail central section. Using the existing rail network is crucial for us.”

Work is also beginning to ramp up on the subsequent phases. Royal Assent for Phase 2A between the West Midlands and Crewe was secured earlier this year, and a shortlist for advanced civil works contractors was announced in September. Ground investigations are also underway for section 2B between Crewe and Manchester.

“The point is that we are very much now a multi-phase project,” Thurston said. “We’re under construction on Phase 1 and in the early stages of project delivery on Phase 2A and close to submitting legislation for Phase 2B.”

Thurston confirmed that this is expected to take three to four years to reach the Transport Select Committee. Appointment of the design delivery partner for Phase 2A is expected “in about a year from now” while the winner of the much anticipated £2bn rolling stock contract is expected in early 2022.

As for lessons learned thus far from the project, Thurston said one is achieving a better balance between the size and quantity of the work packages. He said too many large packages can result in too much complexity while having too many [smaller packages] can result in too many interfaces. “I think there is a sweet spot that we need to think about so that we can carve the work up for a supply chain that responds, whether it is on the civils, the EMAs or the systems,” Thurston said.

He added that lessons regarding efficiencies during Phase 1 is already feeding into work on Phase 2, in how it is packaged and delivered, which he says will offer more predictability in cost and schedule, and offer more value for the taxpayer.

Secondly, he says a great deal of work is underway on refining HS2 as an organisation, from the management team to the rank and file organisation, the board and the way the company interfaces with government. Thurston now issues a report to government on HS2 progress every six months. He says he has a close working relationship with HS2 minister, Mr Andrew Stephenson, and that it is crucial projects of this scale have that level of representation in government.

“Getting the right kind of body to serve the project is crucial,” Thurston said. “That continues to be an area that we will always invest in. We never really stand still. We are going to continue to evolve as the project itself continues to evolve as we move further north. Our headquarters is in Birmingham and we’re thinking of expanding further north to Crewe and Manchester as jobs move in that direction in the next 10 years.

“One of the lessons we have taken from Crossrail is that they probably didn’t adjust the organisation enough over time to reflect the change in demands from the project both in skills and its shape and size.”

Thurston was asked about prospects for the future of the eastern leg of HS2 between Birmingham, Sheffield and Leeds, and he described the decision of whether to proceed as a “big decision for government.” Thurston confirmed that teams focusing on both the west and east legs have pivoted just to focus on the link to Manchester, and he said his focus for now is on delivery of the first two phases of the project.

The future of this element of the project was not far from the thoughts of delegates. Its future along with other large infrastructure schemes such as Northern Powerhouse Rail, Midlands Engine Rail and various electrification projects is tied to the Integrated Rail Plan (IRP). Inevitably, a lot of the discussion at the conference centred on the continuing delay to its publication by the British government.

Rail minister, Mr Chris Heaton-Harris MP, did little to allay these questions by repeatedly refusing to confirm a date for publication of IRP. He only said that this will take place “very soon,” maintaining the government’s rhetoric on the issue more than 300 days after publication was due to take place. Heaton-Harris did though hint that this is likely after the conclusion of COP26 in Glasgow and that the announcement will include a significant investment in electrification.

This pronouncement also prompted Heaton-Harris to issue a warning to industry representatives in the room that the government will not tolerate the severe budget overruns that hindered past electrification schemes.

“We are yet as an industry to deliver electrification on English rail projects anywhere near budget,” Heaton-Harris said. “And, to be quite frank, I am going to be the minister who says, no, I am not going to sign that off if the costs don’t come in where the taxpayer is going to see the best value. I am a conservative taxpaying politician, so I want to make sure all of my tax is spent wisely and sensibly. We need to get all of our ducks in a row for these projects to move forward.”

Arguably, the sporadic nature of Britain’s recent electrification programme prevented the timely delivery of past projects and led to cost overruns. During his address to the conference, Mr Tan Dhesi MP, the Labour Party’s shadow minister for transport, expressed his view that it was a mistake for the government to cancel a rolling programme of electrification and that his party would commit to such a scheme.

“Electrification in the UK can be delivered affordably - at up to 50% the cost of past projects - if there is a long-term, consistent profile of work rather than the current situation of boom and bust,” Dhesi said. “I continue to call for a reversal on the decision to scrap electrification and unlock the funding for electrification across the whole network. This will help us to meet our global obligations on carbon reduction.”

Delaying publication of IRP is starting to bite for those charged with delivering these ambitious projects. Mr Tim Wood, Northern Powerhouse Rail director at Transport for the North (TfN), said the plan to commence work on the first NPR scheme, electrification between Hull and Leeds, is likely to be pushed back beyond the planned start date of 2024-25 with the priority for the first project shifting to upgrades to Rotherham and Barnsley stations.

Ms Maria Machancoses, CEO of Midlands Connect, said that plans for HS2 should not be thought about in isolation as full construction is very important to the Midland’s wider ambitions for rail development outlined in the Midlands Engine Rail programme. Like Wood, she urged the government to publish the plan immediately. “People want action, not just a vision of what is going to happen in the next 100 years,” she said.

Heaton-Harris said the need for change is apparent in the altered habits of commuters since the pandemic. He confirmed that the plan to establish GBR is to simplify the fragmentation of the industry and for GBR to act as a “guiding mind” for the whole network. “They will be accountable for delivering the reliable services that passengers expect,” Heaton-Harris said, adding that he also expects to see the supply chain play a central role in the implementation process.

Likewise, Mr John Larkinson, CEO of the Office of Rail and Road (ORR), said the reforms will provide the regulator with greater freedom to act in areas where it currently has no jurisdiction, improving accountability.

Heaton-Harris concluded his remarks by urging delegates to deliver on accessibility. Speaking off script, he said his feeling is that there is a long way to go before people who have accessibility needs are welcome on Britain’s railways. “We need a culture shift,” he said.

This is an apt observation for the entire sector. With passenger numbers only just returning to 70% of pre-pandemic levels and investment in much heralded schemes far from certain, Britain’s railway is embarking on a new era, one that promises much but where the challenges facing delivery are extensive.