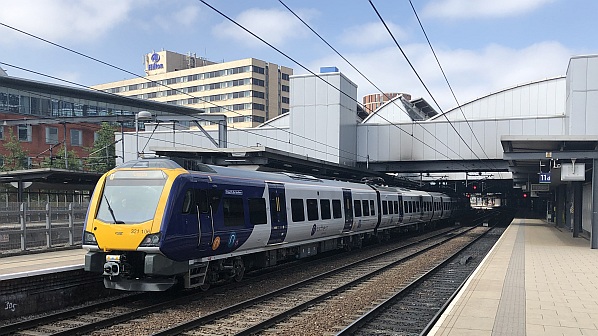 Warnings about the future of the eastern leg of HS2 and Northern Powerhouse Rail have been issued by Manchester mayor Mr Andy Burnham.
Photo Credit: Richard Clinnick.

IRJ at TfN Conference 2021: CONCERNS over the future of the eastern leg of HS2 and Northern Powerhouse Rail (NPR) are increasing, the mayor of Greater Manchester, Mr Andy Burnham, warned the Transport for the North conference in Leeds on September 20.

He told delegates that future generations will be let down if leaders in the north of England do not hold out for what they believe is the right investment to deliver 21st century railway systems.

“It’s not looking great right now,” Burnham said. “The storm clouds feel as though they are gathering over HS2 and NPR, particularly NPR. We’ve got to keep making the case - that was the original Northern Powerhouse vision that we were sold.”

The original Northern Powerhouse was launched by former chancellor, Mr George Osborne, in 2014. “We bring the great cities of the north together to function as a stronger economic cluster that punches its weight on not just the national, but the international stage and we’ve got to stay true to that,” Burnham said. “That was where this all began, and we shouldn’t be downgrading our ambitions at this point in time.”

The eastern leg of HS2 is due to be built from the west Midlands at Delta Junction (where the line will diverge to Birmingham) to Leeds. It is due to connect with NPR, which is a £40bn mixture of new and upgraded lines in the north of England designed to boost connectivity and improve capacity.

The future of NRP and the eastern leg of the HS2 line are reliant on the publication of the Integrated Rail Plan, which by the start of the NRC conference was 263 days late despite repeated claims it was due to be ‘published soon’ by ministers.

“Let's be clear, HS2 is not just about faster journeys to London,” mayor of West Yorkshire, Ms Tracy Brabin, told the conference. “It is about quicker and more frequent services to Sheffield, the East Midlands and Birmingham in a way to provide a green sustainable alternative to our motorways, moving people and freight out of polluting cars and trucks and onto the rail network.

“HS2 is expected to cut annual carbon emissions by 40,000 tonnes every year and release capacity for 2.5 million lorry’s worth of freight,” she added.

TfN chief executive, Mr Martin Tugwell, argued that there is an opportunity to build a new northern England in the post-pandemic period. and called for more devolution and a new approach to funding the region.

The transport body says any new financial arrangement must recognise that local leaders are best placed to shape the future of connectivity that creates opportunities for residents and businesses in their areas.

The ideas are set out in TfN’s Northern Transport Charter (NTC), which is a road map towards further devolution for the region and funding control that would make levelling up real.

The NTC calls for rail passengers to be put first and a Northern Budget to be created for the region. An inclusive and sustainable north and a leading strategic transport delivery plan are also key ambitions of the NTC.

“With further devolution and control over investment and policy decisions, we can work to close the North-South divide, unleash the North’s economic potential, and make real the levelling up agenda in a green accessible and sustainable way: with it we can build a truly new north of England to the benefit of generations to come,” Tugwell says.

Leaders at the event also maintained their calls for the British government to commit to long-term funding for major infrastructure projects including Northern Powerhouse Rail (NPR) as the government prepares to issue the Comprehensive Spending Review (CSR) on October 27 and the ‘imminent’ publication of the Integrated Rail Plan (IRP).