DB to increase number of new staff as 2019 targets exceeded

GERMAN Rail (DB) has announced plans to increase the number of apprentices and dual students hired in 2020 by 300 to 4500 and has allocated €500m towards training across the group, as the company exceeded expectations for hiring new staff in 2019. 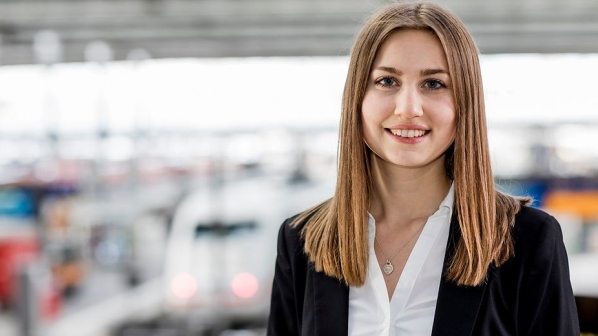 Christina Hoiss, a civil engineer based in Munich, was the 23,000th employee hired by DB in 2019.
Photo Credit: DB AG/Loredana La Rocca

DB has already recruited more than 23,000 new employees in 2019, 1000 more than originally planned, and expects this to reach 24,000 by the end of the year. The new employees include train drivers, attendants, passenger service staff, electronics and IT specialists, and engineers. DB’s overall workforce has increased by 8000 staff over the year.

DB’s HR director, Mr Martin Seiler, says the number of junior employees and apprentices increased by 20% over the past two years and the company plans to continue this trend in 2020.

The company has also formed a new “cross-border unit” which is looking to recruit staff from other countries in the European Union such as Spain, Italy, Greece, North Macedonia, Serbia and Romania to fill roles such as train and bus drivers and electricians. The unit will help prospective employees with the necessary qualifications such as driving licenses and language classes.

In order to simplify the entry phase for new entrants, DB has developed its own Induction platform. “This ensures that new employees receive a great deal of information about their future employer and processes even before the work starts,” Seiler says.

DB is also making additional investments in ​​qualification and digital education. This is to meet both the demand for IT developed and data experts to support digitisation processes as well as to retrain dispatchers, train drivers and onboard staff whose jobs are changing. DB is harnessing training programmes and online learning formats such as a virtual train driver academy to empower employees and promote digital skills.