Abellio to give up Ruhr operations in February

The operator had tried to retain its German contracts through emergency awards. 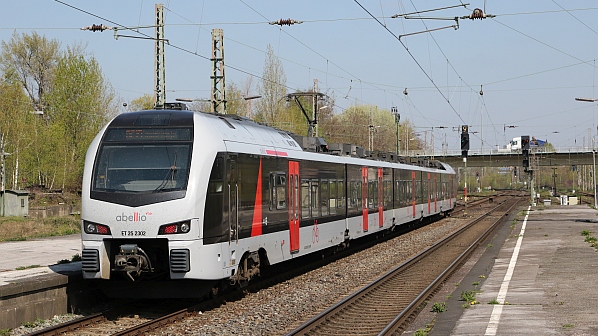 ABELLIO has announced it will no longer operate services in the Ruhr region with effect from February 1 2022.

The existing contracts will be transferred to new operators on a short-term emergency basis by the three transport authorities: Rhine-Ruhr Transport Association (VRR), Westfalia-Lippe Local Transport (NWL) and Rhineland Regional Transport Association (NVR). This decision follows over 18 months of negotiations and previous proposals from Abellio that it, rather than any other operator, should be awarded the emergency contracts.

Abellio Germany has been in court supervised financial protection since July 2021 and had been seeking to renegotiate its existing contracts with German states, although this has been only partially successful, with most other contracts either ending shortly or being removed completely.

Abellio’s decision to no longer run services in the Ruhr region will limit its future financial exposure, but may leave it open to claims for damages from the transport authorities affected. While the Abellio NorthRhine-Westfalia (Abellio NRW) company based in Hagen was the first Abellio rail operation in Germany, the contract terms Abellio NRW had agreed to for recent contracts had become too onerous. In many cases the contracts that have caused the recent financial and operational problems in the Ruhr region and elsewhere in Germany are those that were bid for and awarded from 2016 onwards. Abellio, in common with other German regional train operators, has complained of driver shortages plus disruption and unplanned expense due to infrastructure work.

Abellio had sought to retain some Ruhr region contracts that in some cases it has operated since 2005. Abellio has grown substantially since 2005, when it was a subsidiary of Essen tram operator EVAG and largely owned by British investors Star Capital Partners. By 2019 Abellio had become the second biggest operator in Germany after DB Regio. Wholly owned by Netherlands Railways (NS) since 2008, Abellio moved its headquarters from Essen to Berlin in 2015.

Following the Abellio NRW announcement, VRR, NWL and NVR immediately held meetings with Abellio NRW’s employees and have ensured that employees who transfer to the new emergency operators will retain all their contracted Abellio NRW employment rights and pay. The transport authorities are underwriting this promise. Abellio had agreed a new collective agreement for train crew with the Union of German Locomotive Drivers (GDL) less than one week before announcing it would no longer operate in the Ruhr region.

The train fleets used by Abellio in the Ruhr region are owned by the transport authorities making transfer to a new operator relatively simple.

Abellio has agreed to give up some contracts in central Germany from 2024, while retaining the Saale-Thuringia-Südharz EMU network contract until 2030. In the southern state of Baden-Württemberg, Abellio has sold its Abellio Rail Baden-Württemberg subsidiary to state owned company Sweg for “between €5m and €6m” after failing to renegotiate terms for contracts around Stuttgart. The transaction was finalised on November 24 and Sweg will operate the former Abellio contracted routes until January 1 2024 under an emergency award, pending a new tender for a long-term contract.

In Lower Saxony, Abellio owns Westfalia Rail (WFB) which received confirmation in September from Lower Saxony Transport Authority (LNVG) that an agreement between LNVG and WFB would be put in place allowing continued operation of the company’s contracts for two routes representing around 6 million train-km annually. The contracts run until December 2030 and, assuming Abellio can provide any necessary funding, it now appears likely WFB will remain in Abellio ownership. Along with the Saale-Thuringia-Südharz network in central Germany, this is likely be the only remaining Abellio operation in Germany.