Aurizon rides highs and lows in 2018

AUSTRALIAN freight operator Aurizon has reported a 6% increase in underlying earnings before interest and tax (Ebit) to $A 941m ($US 658.2m) for the 2017-18 financial year, up from $A 884m the previous year, which the company says reflects increased coal volumes and business transformation outcomes achieved during the year. 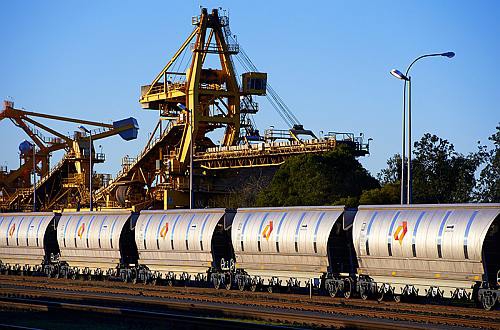 Aurizon recorded a statutory net profit after tax (NPAT) of $A 560m, up from a loss of $A 37m in 2016-17, largely due to the one-off significant impairments incurred in that year. Return on invested capital improved by 1.6% to 10.9% for the year, with an operating ratio of 69.8%.
The company achieved its three-year transformation target by delivering $A 133.6m in transformation outcomes during 2017-18, to deliver savings of $A 393.6m in total since July 2015.

“Despite major regulatory challenges, Aurizon delivered a solid performance in 2017-18. Underlying Ebit was up 6% and we delivered record coal volumes for customers,” says Aurizon managing director and CEO, Mr Andrew Harding.
“We have demonstrated our commitment to returning capital to shareholders, and since March 2017 we have distributed more than $A1bn to shareholders through dividends and share buybacks.”

Aurizon’s coal business increased by 7% to 212.4 million tonnes in total across Queensland and New South Wales, reflecting the prior year impact from Cyclone Debbie, the start of new contracts and high levels of demand given the strength in coal prices. Based on current market conditions, the forecast for 2018-19 above rail coal haulage is in the range of 215-225 million tonnes.

Aurizon’s Network business, which provides infrastructure access across the Central Queensland Coal Network, saw 229.6 million tonnes of coal moved in 2017-18 on the back of continuing strong Asian demand.

“We estimate tonnages would have been 7-8 million tonnes higher if Aurizon Network did not have to re-align its maintenance and operating practices (from February 2018) to comply with the Queensland Competition Authority’s (QCA) flawed UT5 Draft Decision,” Harding continues.

Aurizon has been in dispute with the QCA since mid-2017 over the cap on access fees for Aurizon’s Network business approved by that regulatory body. The QCA’s recommended a cap of $A 3.9bn falls far short of the $A 4.9bn sought by Aurizon.

“Unfortunately, this has been a foregone economic opportunity and one that could have been avoided,” Harding says. “We remain committed to trying to reach a fairer and commercially appropriate outcome and are continuing efforts through the full range of regulatory, commercial and legal avenues.”

Aurizon’s woes have been further compounded following the blocking of the planned sale of its Queensland intermodal business by the Australian Competition and Consumer Commission (ACCC).

The sale of the business to rival Pacific National (PN) and logistics group Linfox, along with the Acacia Ridge intermodal terminal to PN, was planned for completion earlier this year.

The ACCC says that Aurizon has had alternatives to selling to PN that would have been more competitive and has subsequently taken court action against both parties alleging anti-competitive behaviour in relation to the proposed sale.

Aurizon’s reaction has been to cancel the sale of the Queensland intermodal business and it says it will now proceed to close the business. However, the ACCC has won an injunction to prevent the closure until the matter can be heard in the Federal Court in November this year.