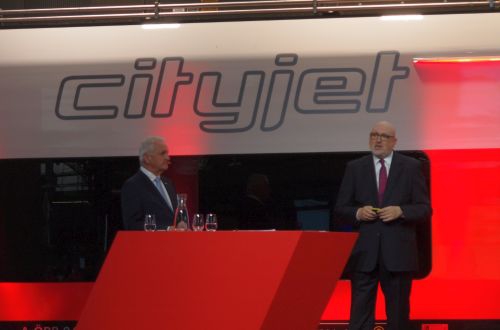 Rail Cargo Austria (RCA) says that they are now number two in Europe as rail freight operator in relation to the number of net tonne kilometres covered in 2016. The holding company achieved an EBT of €166.2m in 2016, down from the previous year’s €192.8m.

The new link from the Vienna main station to the airport carried two million passengers in 2016 and the new Nightjet trains saw 600,000 tickets sold between mid-December 2016 and mid-April 2017. The increase in passenger figures applies to both long-distance and regional services. The passenger division achieved an EBT of €81.9m, almost half of the total EBT of the holding.

RCA achieved an EBT of 44.3m and an EBIT of 60m. This is less than in 2015 but Matthä says that this compares to negative EBIT figures for DB Cargo (-€81m) and PKP Cargo (-€30m) and shows that RCA is still doing well in a very competitive market. RCA says it is now the second-largest rail freight operator Europe based on net tonne-km. RCA reports 28.8 billion net tonne-km with DB Cargo in front with 94.7 billion and PKP Cargo in third with 28.5 billion.

The infrastructure division reported an EBT of €49.6m which is much higher than in 2015 (€12.8m), the 2015 figure being influenced by special effects such as postponed sales of land.