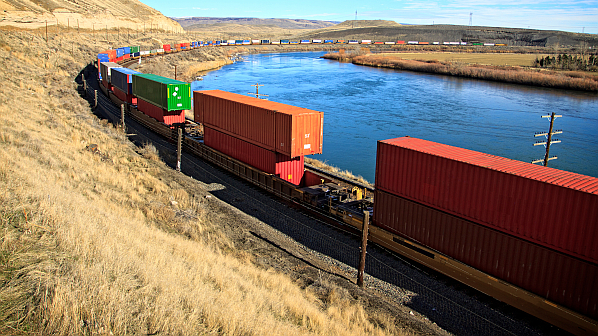 Class 1 railroads have responded to questions about congestion and charges by the STB.
Photo Credit: Shutterstock.

THE Association of American Railroads (AAR) says its members have made clear how they are collaborating with all stakeholders to keep intermodal terminals and the entire national rail network fluid. The AAR added that the Surface Transportation Board (STB) should refrain from any regulatory action that would undermine those efforts.

In his letter, Oberman asked all Class 1s to provide certain information about the extent of congestion at key container terminals as well as policies and practices for assessing storage charges. He also expressed concern over “significant” container storage fees that some shippers are being forced to pay to receive their containers.

Railway Age has published responses from seven Class 1s. BNSF highlighted the shortage of staff and equipment, and said that at any point up to 30 trains could be staged at various locations. Canadian National (CN) said the problems had been building for 15 months with several issues including the pandemic, the blocking of the Suez Canal and strikes highlighted as issues during the period.

“Our best assessment is that this phenomenon is primarily the result of logistics challenges affecting intermodal shippers’ access to, and decisions on how to allocate, the resources needed to handle inbound intermodal shipments, leading them to delay the pickup of loaded containers that have arrived by train at our terminals,” Canadian Pacific (CP) says. CSX, in its letter to the STB, highlighted the problems that affect the entire logistics chain and how that can impact services.

Kansas City Southern (KCS) highlights a surge in demand as the American economy recovers, which has led to the need for more trains. Norfolk Southern (NS) says it agrees with the concerns and that the international nature of its business means its storage fees are dependent on market forces.

Union Pacific (UP) says in its letter to the STB, published by Railway Age, that it has capped its fees while also highlighting the increase in demand in the intermodal sector as the global economy recovers from the pandemic.