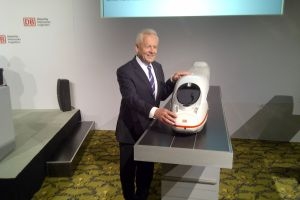 The objective is to double turnover to Euros 70bn, compared with the situation in 2010, and to invest Euros 86bn over the next nine years, of which Euros 34bn will come from its own resources. This represents an average annual investment of Euros 9.55 billion, which equates to a 26.7% increase compared with 2011.

"We want to become the profitable market leader, we want to be one of the top 10 employers in Germany, and we want to be an absolute pioneer when it comes to the environment," Grube says. "Our goal is to achieve at least a 10% return on capital employed and have a redemption rate of at least 30%. This means nothing else than this: we will be able to pay off all of our debts in three years."

DB says about 75% of its investment programme, or Euros 64.5 billion, will be directed at infrastructure, with the majority of the remaining Euros 21.5 billion going to modernise or replace its long-distance passenger fleet.

DB wants to cut its CO₂ emissions by a further 15% by 2020. "We have decided that by 2020 renewable energies should generate 35% of our traction current in Germany," says Grube.

Grube was speaking at DB's annual results conference in which he announced good results for 2011. Turnover increased by 10.1% to a record-breaking Euros 37.9bn, while adjusted Ebit rose by 23.7% to Euros 2.3bn.