Eurostar ridership up in the third quarter

WITH the 20th anniversary of the start of Eurostar high-speed cross-channel services between Britain and mainland Europe approaching next month, the operator reported a 3% increase year-on-year in passenger traffic to 2.8 million in the third quarter which ended on September 30. 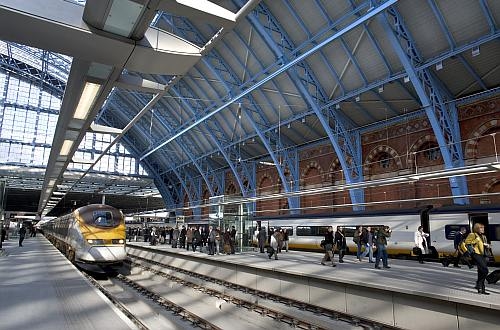 Sales revenue also grew by 2% to £211m to mark 10 consecutive years of growth in sales revenues and passenger numbers. Eurostar says improving economic confidence in Britain reported in the first half of the year continued to gain momentum in the third quarter resulting in improved business travel bookings. Indeed Eurostar's Business Premier class reported a 6% increase in bookings compared with the third quarter of 2013.

From December Eurostar will introduce a year-round service direct from London to Provence, stopping at Lyon, Avignon and Marseille, although passengers travelling on Marseille - London services will be hindered by a 1h 43min wait at Lille due to British border controls.

Eurostar also plans to introduce direct London – Amsterdam services in 2016 with stops at Antwerp, Rotterdam, Schiphol Airport and Amsterdam Central. Many of these services will use new Eurostar e320 trains which are set to enter service in late 2015. The first train, which has capacity for 900 passengers, is set to be unveiled on November 13 at London St Pancras station to mark the 20th anniversary of the company.

The £700m order for 10 trains was placed with Siemens in 2010 and included the £100m refurbishment of Eurostar's existing fleet.

"Over the next two years our customers will see a complete transformation of our service as we upgrade and enhance every stage of the passenger journey," says Mr Nicolas Petrovic, Eurostar chief executive says. "By making a substantial investment in our fleet, we are sending a strong signal about the ambition of our business."