Project will relieve congestion in and around Marseille, Nice and Toulon. 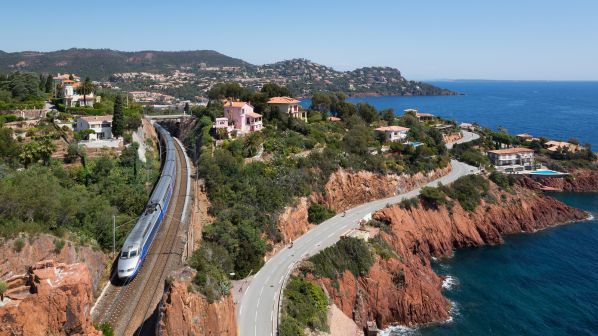 The upgrades will help to improve capacity on the congested and slow, but spectacular, Nice - Marseille line.
Photo Credit: David Gubler

THE French government has announced that additional consultations between stakeholders on the new Ligne Nouvelle Provence Côte-d'Azur (LNPCA) serving Provence and the French Riviera is complete and that central and local government have agreed financing for the €3.5bn cost of the project's phases 1 and 2.

LNPCA is a combination of new sections and upgrades of the existing network, which is designed to eliminate railway congestion in Marseille, Toulon and Nice, and relieve the slow and congested Marseille - Nice line. A major part of the project is a new underground station at Marseille Saint Charles and subterranean links to the existing network.

Following initial discussions, additional consultation took place in 2020 and early 2021 on a series of points which have now been agreed by the committee piloting the project, which includes Mr Renaud Muselier, president of the Provence-Alpes-Côte d'Azur region.

The route is part of the Trans-European Transport Network (TEN-T) and EU funds are expected to cover 20% of the cost of the project. Central and local government will both contribute 40%, equal to €1.383bn at 2020 prices.

Phase 1 will include several modifications and additions to track around Marseille to increase capacity, adaptations around Toulon to support a new local shuttle service and a new station to serve Nice airport.

Phase 2 will involve construction of the new underground station in Marseille, links to the existing network, and upgrades in the Cannes and Nice areas, including a new station at Cannes Marchandises, and an underpass to avoid conflicting movements for trains to and from Grasse.

Phase 3 will support further capacity increases and Phase 4 will involve construction of new sections of line in the Cannes and Nice areas.

No timetable for the work has yet been announced.