THE German federal government, German Rail (DB), and a rail union have formed a ‘railway alliance’ to agree a financial rescue package for DB in the wake of the coronavirus pandemic. 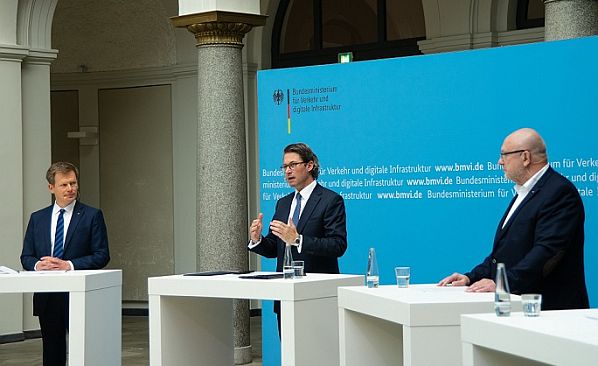 The objective is to cope with the economic and social consequences of the coronavirus pandemic on DB so that DB’s Strong Rail strategy and associated expansion and modernisation programme as well as recruitment and training can continue. “This gives employees the necessary security and stability for their jobs and job prospects,” the partners say.

DB faces a loss of revenue and increased cost burden of between €11bn and €13.5bn. Under the deal, DB will cover half of this by cutting costs, which could produce savings ranging from €4bn to €5bn. In addition, DB’s Group Management Board will not receive any bonus payments in 2020, which would achieve savings “in the three-digit million range.”

“The federal government will guarantee to continue the planned investments in the existing network, new construction and expansion and the technological renewal of the overall system (digital rail Germany), in order to further promote the ecological restructuring in the transport sector and significantly support the climate goals,” the partners say. “One thing is clear: the financing of the infrastructure is essential for a successful future of the railways.”

DB will be allowed to obtain additional loans from the capital market, while the budget committee of the German parliament will be asked to agree an increase in DB’s debt ceiling of €25bn up to €30bn.

The federal government says it is ready to agree an equity increase for DB, subject to the agreement of the European Commission, which could amount to €6.7bn.

According to the agreement, the unions “will agree intelligent, socially balanced and ecologically sensible measures for economic stabilisation.”

Mofair, which represents private German rail operators, is very unhappy with deal which excludes other rail operators. Mofair points out the private operators provide 40% of local train services and more than 50% of rail freight in Germany.

“The corona crisis has hit all rail transport companies badly, not just DB,” says Mr Christian Schreyer, president of Mofair. “All industry companies need support. We are therefore proposing a broad alliance that is open to all railway companies in Germany.

“Unfortunately, federal transport minister Scheuer initially unilaterally committed to supporting the state-owned DB, without involving other companies. But our employees also did an excellent job during the crisis and continue to do so every day.”

Likewise, the union of German Locomotive Drivers (GDL) refused to sign up to the agreement, stating that numerous back doors are built into the strategy so DB remains a global cross-traffic company, something the union rejects.

“DB sank billions abroad, in Arriva, for example, and that is money that is missing from the rail system in Germany,” says Mr Claus Weselsky, GDL’s federal president. “Services of general interest and public service obligation are common tasks and therefore should be financed through a community of solidarity. We are committed to transferring the complete railway infrastructure to a non-profit organisation.”

The union also rejects the notion of reducing wages, favouring a restructuring of DB’s management, which it describes as bloated. “Instead of more and more chiefs, we need significantly more Indians,” Weselsky says. “DB’s competitors usually manage with much less management and administration.”