SCI Verkehr’s annual assessment of the rail business climate, based on a survey of around 100 representative companies from the global railway industry, says the outlook is more positive in the first quarter of this year compared with the first quarters of both 2016 and 2017 (see graph below). 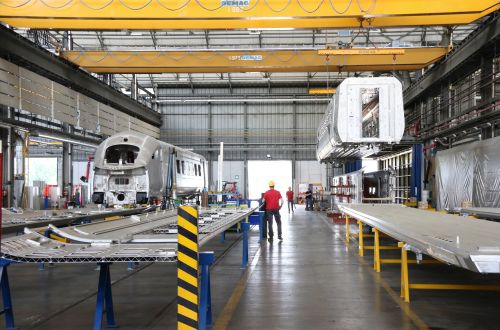 “Due to increasing demand for products and services, some manufacturers are already reaching their capacity limits,” SCI says. “This has been increasingly reported in the recent past by European freight wagon manufacturers’ customers. Starting from a high level and based on the positive development of the current business situation, the managers surveyed are nonetheless somewhat cautious about an even steeper increase in the business development in the next six months.”

SCI says 42% of managers surveyed evaluate their current business situation at the start of this year as good, which is the best result for three years, with none of those questioned feeling dissatisfied.

Overall, 50% of the managers reported rising demand, which is the highest for 10 years, although 19% of managers have observed falling demand. Only 23% of managers forecast growth during the next six months, while 77% expect business to remain static.

Overall, SCI says managers expect the business situation “to remain at least as good as it currently is.”

In contrast, the outlook for investment is becoming increasingly pessimistic with only 38% of managers saying they expect investment to rise compared with about 45% in 2017, and 58% in 2016, while 15% of managers surveyed expect to invest less this year.