Germany: Baden-Württemberg’s Transport Ministry has announced a €13m fund for infrastructure maintenance and development during 2020 for 615km of lines not owned by German Rail (DB). 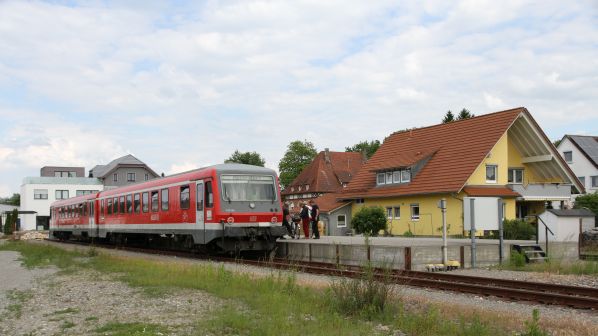 The Rossberg - Bad Wurzach line owned by the City of Bad Wurzach is set to benefit.
Photo Credit: Keith Fender

The lines amount to approximately 15% of the state's network, including some eligible light rail lines. The funds will be made available to 19 rail operators to fund work on 25 sections under the state’s ‘regionally-owned railway financing’ laws. The improvement works will enhance the reliability of some heavily used lines and help to continue operation on some less used sections.

Britain: Parts manufacturer Unipart Rail closed its York site last month with a loss of 72 jobs. The company had struggled in the face of falling demand for replacement parts due to the introduction of new fleets by British rail operators, as well as plans announced by York Council in 2019 to compulsorily purchase the site. The company has said that the affected employees could be offered work at other Unipart sites in Crewe, Doncaster, Southport, Leicester or internationally.

Lithuania: Freight transport company LG Cargo (LGC), a subsidiary of Lithuanian Railways (LG) signed a sales agreement with Forwardis, a subsidiary of SNCF Logistics, on June 9. Forwardis will work to expand LGC’s share of the European freight market by attracting customers to LGC’s freight services operating within Lithuania and across the Baltic states. LGC and Forwardis have previously collaborated on the Amber Train intermodal freight rail project, in cooperation with Lithuanian, Latvian and Estonian railway companies.

Estonia: Estonian Railways (ER) has agreed a €95m loan with the European Investment Bank (EIB). The loan will be used to modernise ER’s traffic management systems across the country’s Trans-European Network for Transport (TEN-T) infrastructure, primarily along the North Sea-Baltic corridor. The loan is part of ER’s 2030 investment plan, which aims to improve the quality and safety of the network and will repaid over 25 years.

Italy: Italian State Railways (FS) has signed €300m loan agreements with UniCredit, to be paid over three years, and a two-year agreement with Intesa Sanpaolo. FS says it is taking advantage of measures introduced by the European Central Bank to boost the economy with the loans secured at "very competitive pricing." The funds will be split between Trenitalia and infrastructure manager Italian Rail Network (RFI).

This follows a new €200m bond issue through financier Eurofima, which has a 10 year maturation. Proceeds from the bonds will finance FS’s fleet of Bombardier Traxx E464 electric locomotives, delivery of which was completed in 2015, and Corifer Vivalto coaches, which were delivered in 2017. This comes as ratings agency Fitch downgraded FS to a BBB- rating on May 8 due to the economic impact of coronavirus lockdown restrictions. However, the agency remains optimistic and considers FS’s financial future to be ‘stable.’

Germany: Stadler has completed the takeover of engineering firm Vipco, based in Mannheim. Vipco, which has around 50 employees, will focus on developing train control and automation software and components for both new and retrofitted rolling stock.

Switzerland: Battery producer Leclanché has announced plans to restructure the company to expand production and R&D capabilities in partnership with Polish energy supplier Eneris. The company has stated that development of power storage for the rail transport sector will be a significant focus in future.