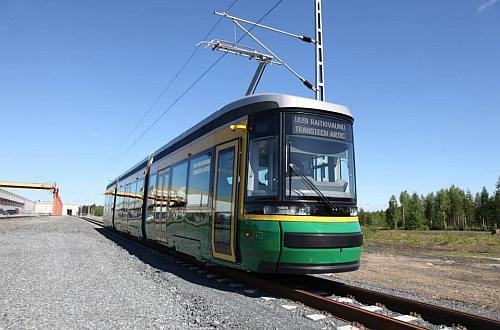 A Transtech LRV for Helsinki.

Škoda purchased a majority stake in Transtech in 2015 and finalised the purchase of the rest of the shares on May 21 from Sinituote, the owner of Transtech. The deal was signed during the visit of the Czech Republic’s prime minister, Mr Andrej Babiš, to Finland.

Škoda says its long-term objective is to consolidate its position in the Western European rail market. “This is also the intention of the new owner, the international investment group PPF, under whose leadership we have succeeded in finalising the acquisition of Transtech,” says Škoda Transportation’s chairman and CEO, Mr Petr Brzezina.

“In less than three years, we have managed to successfully restructure and stabilise Transtech,” adds Mr Zdeněk Majer, vice-president of Škoda Transportation Group and chairman of Transtech. “We have received new orders and are currently delivering trams from Transtech to Helsinki and Tampere. We are also supplying new cars to Finnish Railways. During this period, we have increased the number of employees from 500 to 750. The company’s annual sales reached Koruna 3bn ($US 137m).”