BRITAIN's Office of Rail Regulation (ORR) published its 2013 Periodic Review of Network Rail (NR) on June 12, which sets out how the regulator expects how the infrastructure manager to reduce costs by £2bn during Control Period 5 (CP5), the 2014-19 funding period. 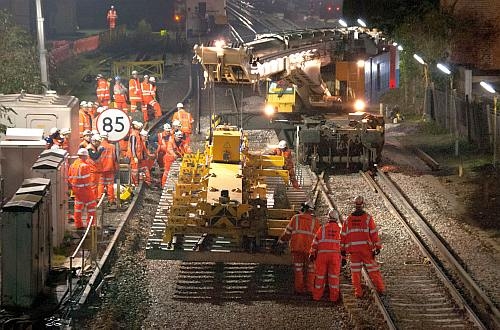 The ORR's assessment of NR's Strategic Business Plan (SBP) suggests that total operating costs for the network over the next five years should be no more than £21.4bn, £1.9bn below the figure proposed by NR and £2bn less than the allocation for Control Period 4 (2009-2014). This means that if the target is met and the forecast 14% rise in passenger traffic materialises, infrastructure costs per passenger-km will fall by 28% by the end of the decade.

The ORR says savings will be achieved through the implementation of new technologies, better management of the network, and the introduction of more efficient ways of working. Network Rail said in the SBP that it expects infrastructure operating costs to fall to £2.03bn in CP5, £212m less than in CP4, primarily due to the deployment of new technologies, although the ORR believes this figure can be further reduced to less than £2bn.

The ORR's recommended budget for maintenance expenditure is £4.65bn and broadly in line with the £4.67bn proposed in the SBP, which itself represents a reduction of £884m compared with the figure for CP4.

With the increasing availability of high-quality data, the ORR believes NR will be able to move from reactive maintenance to a more preventative asset management regime, which it says will reduce the impact of infrastructure-related failures on network performance.

NR anticipated in the SBP that investments in enhancements would need to rise from £11.3bn in CP4 to £12.4bn in CP5, around 30% of which would be required for the electrification programme, and 25% for Crossrail and Thameslink works in the London area. Following a review of the projects, the ORR proposes a budget of £11.6bn for this work, with a further £639m to cover compensation payments to train operators.

The ORR says it wants to incentivise ORR and train operators to reduce costs still further by allowing NR to enter commercial agreements with operators to manage specific enhancement projects, which would allow both sides to share any savings. NR will also have to demonstrate to train operators and passengers how planned improvements will benefit rail users.

While NR's already-substantial debt is expected to rise, the regulator anticipates that the value of NR's assets will also increase and the debt/asset ratio will remain within manageable limits. The ORR also argues that NR should be able to raise debt at lower interest rates than it previously assumed.

The ORR will also require NR to improve punctuality, and by 2019 expects an average of 92.5% of trains to arrive on time, which will require a significant improvement in performance over current levels, particularly on long-distance routes. During 2012-13, 87% of Britain's long-distance services arrived at their destination within 10 minutes of schedule, 2% below the previous financial year and 4.5% short of the ORR's target for the year.

Following a period of consultation with the industry, ORR will publish its final determination on NR funding for 2014-2019 at the end of October.