Curtailing of operator’s attempts to enter the French market have prompted complaints to national regulator. 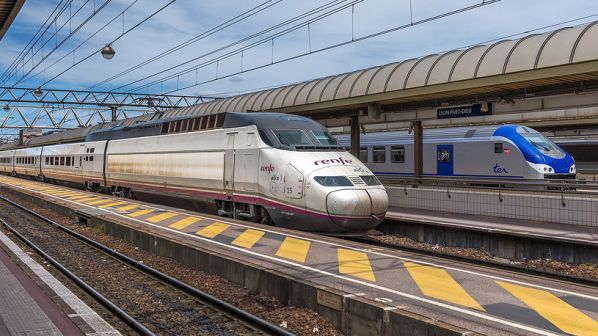 RENFE has denounced obstacles to its prospective entry into the French passenger market, and according to a report in Spanish newspaper El Pais, the Spanish state-owned operator has lodged complaints from its office in Paris with France’s Regulatory Transport Authority (ART) demanding compliance with competition rules set out by the European Commission (EC).

According to El Pais, Renfe has condemned French claims that its class 100 trains built by Alstom, and based on the same design as TGV, which operate as far as Lyon without any issue, cause electromagnetic interference between Lyon and Paris.

In addition, Talgo is seeking authorisation to operate its 360km/h class 106 Avril trains in France with the trains due to be delivered to Renfe next year. However, El Pais reports that the manufacturer is reportedly facing difficulties with securing signalling equipment which combines ETCS with the French TVM 430 cab signalling system, which is not possible without the cooperation of French National Railways (SNCF) Group companies.

According to El Pais, Spanish transport minister, Mr José Luis Ábalos, has sent letters to his French counterpart, Mr Jean-Baptiste Djebbari, and to the European commissioner for transport, Ms Adina Valean, complaining that SNCF holds all the cards in approving trains and granting access to the network. In order to carry out tests, Renfe is forced to work with SNCF subsidiaries, such as Eurailtest and Masteris, and Paris Transport Authority (RATP).

Renfe originally hoped to launch services between Marseille and Lyon in 2021, and to Paris in 2023. However, the latter service has now slipped to 2024 at the earliest. The Spanish company is also interested in bidding to operate regional passenger services under Public Service Obligation rules but El Pais reports that it has received insufficient information on the lines concerned from the current operator, SNCF.

Renfe is also reportedly considering appealing to the regulator over SNCF receiving public aid with few requirements on how this money is used. El Pais reports that Renfe suspects SNCF is using such funds to finance entry into third markets - SNCF is investing €600m to launch its low-cost Ouigo service in Spain. Operation of these services got underway between Barcelona and Madrid using TGV Duplex sets on May 10 and SNCF plans to extend the service to other routes.