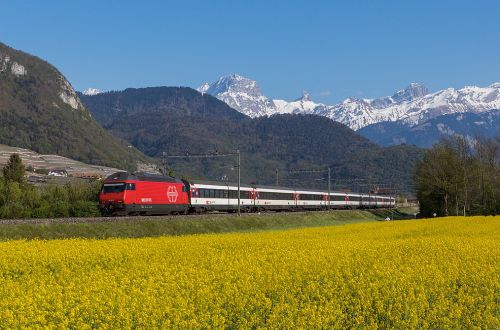 Consolidated net income increased 4.8% year-on-year to SFr 399m ($US 421m), mainly due to higher productivity, improved results in the passenger, property and infrastructure sectors, and the RailFit20/30 efficiency programme launched in 2016. This programme is well on course, having achieved savings of SFr 785m by the end of 2017.

Operating income continued to improve, increasing 5.1% to SFr 9.4bn, while operating expenses were up by 2.8% to SFr 8.94bn.

Average passenger journeys continued the upward trend of recent years, increasing 0.6% to 1.26 million per day, while punctuality (arrival within three minutes of schedule) rose 0.2% to hit a six-year high of 89%.

The debt coverage ratio improved from 7.47 in 2016 to 5.97, a particularly satisfying result in view of SBB’s stated target of 6.5, which it has achieved for the first time. Public sector funding climbed 8.1% to SFr 2.7bn.

The only fly in the ointment was the freight sector. SBB Cargo suffered a massive loss of SFr 239m, after a small but encouraging profit of SFr 1m the previous year. This was entirely due to the slump in the domestic sector, which made a loss of SFr 245m as wagonload volumes plunged 14.5%.

SBB Cargo is exploring ways of restructuring this loss-making sector, including staff cuts and increased use of automation and digitalisation. On the plus side, SBB Cargo International doubled its result to SFr 8m, despite the devastating effect of the seven-week closure of the Rhine Valley Line at Rastatt in Germany.

In view of the satisfying overall result, CEO Mr Andreas Meyer announced that SBB would give back more than SFr 50m to customers in the form of various discounts, including cut-price fares, cheaper hotline services, vouchers and refunds for service interruptions.