Ilsa’s trains are due to begin operating in Spain under the Iryo brand later this year. 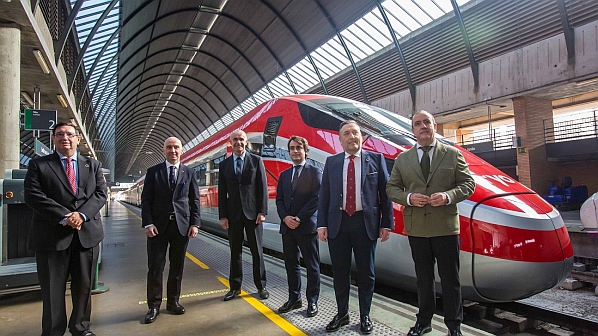 A third company is set to acquire a stake in Spanish new high-speed entrant Ilsa according to reports in Spain.

The El Espanol and Expansion newspapers reported in mid-February that Spanish concessionaire Globalvia will acquire 25% of Air Nostrum’s shares in the business, which operates under the Iryo brand.

Should the deal be completed, then Trenitalia would hold a 45% share in Ilsa, Air Nostrum would have a 30% share and Globalvia would have a 25% share. Globalvia, a transport concessionaire, is owned by three pension funds from Britain, Canada and the Netherlands.

An Ilsa spokesperson told IRJ that the search for Ilsa’s third partner “has not been closed yet, and we do not comment on ongoing transactions.”

Globalvia had previously bid for access agreements to run services on three high-speed corridors in 2019 but was unsuccessful. Package A, the largest, was awarded to Spanish national operator Renfe, Package B was awarded to Ilsa and French National Railways’ (SNCF) subsidiary Ouigo was awarded Package C.

Ilsa plans to commence operation in the second half of 2022 on the Madrid - Barcelona, Madrid - Valencia/Alicante and Madrid - Seville/Malaga routes. There are plans to expand its network of destinations, including to the Basque region.

The first Ilsa ETR 400 train arrived in Seville on February 11 ahead of the introduction of passenger trains later this year. The Madrid - Seville/Malaga route will be the second route to be inaugurated by Ilsa.

At an event to mark the train’s arrival, Ilsa says in a statement that it expects that more than 2.5 million passengers will use its Iryo trains to and from Seville-Santa Justa, Maria Zambrano Malaga and Cordoba. This is expected to generate €338m in 2025.

Additionally, Ilsa says it expects to benefit the Andalusian economy by €28.7m in salaries and regional taxes in 2025, and create 660 jobs including ground staff, crew, operations, maintenance and administrative positions.

“The arrival of Iryo in 2022 is a new opportunity to improve the city’s connections, to help generate economic activity and employment, and to attract new investment in the city,” says the city’s mayor Mr Antonio Muñoz who was speaking at the event.