The project will improve links with Kenya. 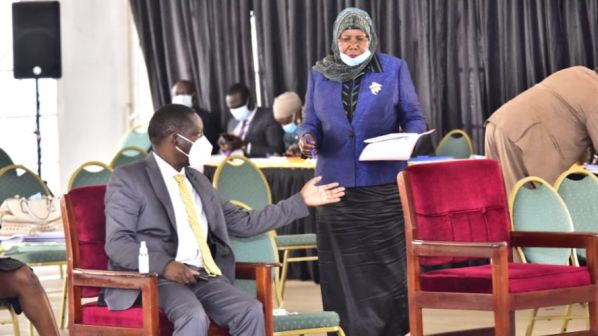 THE Ugandan parliament has approved the government’s plans to borrow €327.01m to support the Kampala - Malaba Metre Gauge Railway Project to refurbish the existing line from the Ugandan capital to the Kenyan border.

According to a report by the Parliament Committee on National Economy, presented by chairperson, Ms Syda Bbumba, Rift Valley Railways (RVR) was contracted to manage the line, but left it with dilapidated assets that were no longer operable. Uganda and Kenya terminated the contract with RVR on January 25 2018, after the company failed to meet its contractual targets.

Uganda Railways Corporation (URC) has since struggled to meet the demands of bulk freight customers due to the poor reliability of infrastructure and a lack of operational freight wagons.

Bbumba told parliament on May 11 that the government planned to rehabilitate the 250km Malaba - Kampala line, as well as the 8.3km Kampala - Port Bell and 12.3km Kampala - Nalukolongo - Kyengera branch lines. In addition, a €34.6m project to rehabilitate the 375km metre-gauge Tororo - Gulu railway was launched in October 2020 with financial support from the European Union.

The government also plans to purchase and refurbish coaches, wagons and locomotives, create a railway training school for URC management and staff, and stock spare parts.

“If the Metre Gauge Railway project is implemented, the cost of transport by rail will improve from the current average of between $US 0.09 - $US 0.13 per net tonne-km, to $US 0.05, reducing the cost of doing business,” Bbumba says.

According to the committee report, implementation of the Metre Gauge Railway project will also reduce travel times for commuters from two hours travelling an average of 12km to 20 minutes. Freight volumes are also expected to increase from 20,000 tonnes to 300,000 tonnes per month.

The committee recommended that URC should evaluate the possibility of using the army to implement parts of the project in order to reduce costs.

“The committee observed that the army brigade has been used to support the construction of some projects and where they have been used, the costs have been cheaper than the market costs,” Bbumba says.

While recognising the need for the landlocked country to improve its rail network, some MPs questioned the need to develop the metre-gauge network while work continues to develop the planned Standard Gauge Railway (SGR) Project that will connect Uganda with Kenya, Rwanda, Democratic Republic of the Congo and South Sudan. Depending on discussions with China, which is financing and overseeing the SGR project, the SGR project is expected to begin within the next two years.

“This [metre gauge] project has been long overdue, since the old railway stations are now dilapidated,” says Katakwi District MP, Ms Violet Akurut. “But why are we opting for a metre gauge railway when our neighbouring countries in the region are setting up standard gauge?”

“The loan is good but its purpose is going to crush the dreams of the people of Tororo who have been looking forward to the SGR which they expected to improve their business opportunities,” added West Budama County North MP, Mr Richard Okoth Othieno.

The minister of state for finance, Mr David Bahati, told parliament that the country’s debt burden was under control and still one of the best in the region. He assured MPs that the SGR project was still on-course.

For detailed data on rail projects in Uganda and around Africa, subscribe to IRJ Pro.