ALSTOM has unveiled a concept for a hydrogen fuel cell variant of its Coradia Polyvalent (Régiolis) multiple unit, which the supplier is developing as an alternative to diesel trains for the French regions. 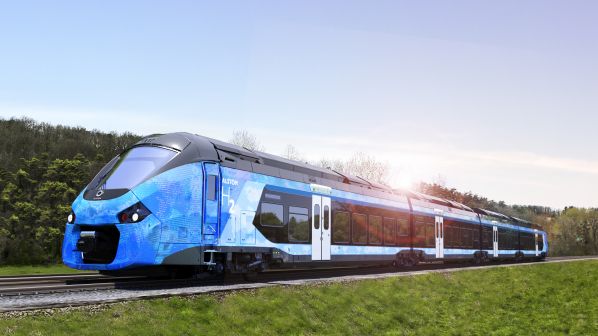 The project builds on Alstom’s experience in Germany with the prototype iLint hydrogen train, which entered service in the state of Lower Saxony in September.

Alstom says there are currently around 1000 DMUs in service in France, at least half of which are more than 20 years old and therefore due for replacement within the next decade.

For fuel cell technology to be viable on the French railway network, Alstom says it will need to deliver a fleet of 25-50 hydrogen trains before 2028. The manufacturer says several regions have expressed an interest in the technology in recent months.

Alstom plans to offer a 160km/h bi-mode train equipped for electric and fuel cell operation. A 72m-long four-car train will accommodate around 230 seated passengers with capacity for up to 200kg of hydrogen, providing a range of 400-600km on non-electrified lines between fuelling cycles.

The introduction of hydrogen fuel cell trains is in line with the objectives of the French government’s hydrogen plan, which was published in June.

In September Alstom announced it was working with French National Railways (SNCF) and the regions of Grand-Est, Nouvelle-Aquitaine, and Occitanie on the development of a battery variant of the Régiolis.