GWR and TPE class 802s to be retro-fitted with a battery replacing a diesel engine. 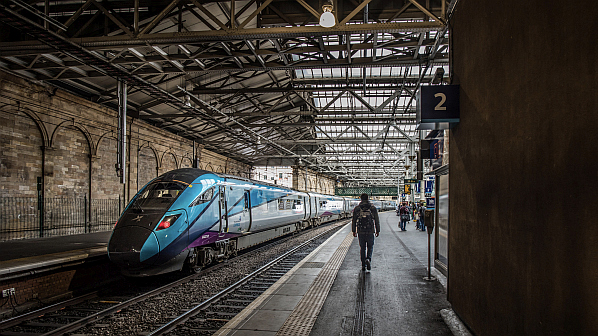 A battery will be fitted to a TransPennine Express class 802/2.
Photo Credit: Hitachi/Bruce Galloway.

HITACHI has confirmed plans to fit a battery to one of its five-car 200km/h bi-mode class 802/2s used by TransPennine Express (TPE), with trials beginning next year.

This will be similar to another trial already announced using a similar bi-mode class 802/0 that will also be fitted with a battery that will begin operating with Great Western Railway (GWR) next year. IRJ understands that the trials will run in parallel and data collected from both regarding performance and emissions will be compared.

The battery being fitted to both trains will be 6m by 2.2m, and will replace one of the train’s three 700kW MTU 12V diesel engines. The retrofitting will be undertaken at Hitachi’s Newton Aycliffe facility where static testing will also take place. The battery packs will be supplied by Hyperdrive’s Hyve facility, based in Sunderland.

Hitachi says that installing the battery technology on its inter-city trains will cut fuel usage and reduce carbon emissions by at least 20%. The batteries will be charged by regenerative braking on non-electrified lines and by 25kv ac catenary when operating on electrified lines.

“We believe there is a pathway where we work up to a fully battery-electric intercity train,” Hitachi spokesman, Mr Douglas McIlroy, told IRJ. “Combined with discontinuous electrification, improvements in battery technology and Hitachi Energy’s fast charging infrastructure[DB1] , this trial is the first step in that journey.”

Initial mainline testing will be without passengers, but the aim is for both trains to operate in service using battery technology next year.

Trials with the GWR class 802/0 will include operating only on battery power, and to supplement the diesel engines. With the TPE trials, there is an ambition to improve performance when climbing gradients across the Pennines.

McIlroy told IRJ that there is no compromise on performance once the battery is fitted and that no seats will need to be removed as the battery will be fitted underneath the coach, where the diesel engine is fitted.

Hitachi is at the advanced stage of design and engineering for the GWR trial with the proof of concept and layout in the final stages of approval. Work has also begun to build the battery for functional testing and integration onto the train.

Having already undertaken fire safety tests to support the design and safety case of the battery, system integration will take place at Hitachi’s Naples factory. This will be followed by combined testing in Japan. Both of these tests will take place in 2022 before the equipment is fitted to the GWR class 802.

TPE’s network is a mixture of electrified and non-electrified routes, stretching from Liverpool and Manchester in the northwest to York and Newcastle in the northeast, and Edinburgh and Glasgow in Scotland, although the Hitachi trains only serve the Scottish capital. The GWR trial will be conducted on the 490km London Paddington - Penzance route, of which only 85km is electrified between London and Newbury.

“In a world increasingly vulnerable to climate change, and the environmental and atmospheric impacts of carbon and other forms of pollution, the rail industry must both show leadership and take the lead; waiting for permission simply won’t be an acceptable excuse,” says Mr Peter Wilkinson, Department for Transport (DfT) managing director for passenger services.

For detailed data on fleets from around the world, subscribe to IRJ Pro.