CHINA successfully completed low-speed dynamic testing of a 600km/h prototype maglev car developed by CRRC Sifang on a test track at Tongji University in Shanghai on June 21, a milestone for the project launched in June 2016. 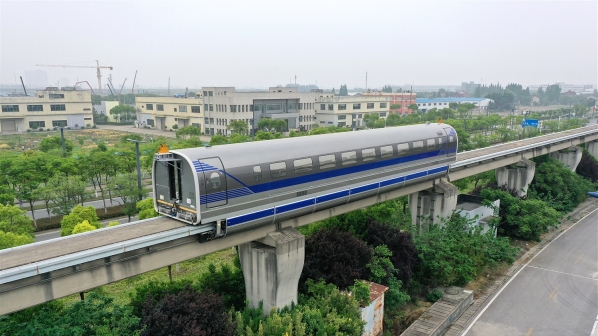 CRRC is developing the train alongside more than 30 companies, universities, and research institutes. The train has been identified as a key development under the Ministry of Science and Technology’s Advanced Rail Transit research and development plan.

The trial was undertaken following static testing and debugging, and included dynamic operating environments such as switches, curves and ramps. This allowed the testing of key components such as suspension guidance, speed and position measurement, the vehicle-rail interface, traction, and the communication systems.

Mr Ding Sansan, deputy chief engineer of CRRC Sifang and head of the maglev project, says the development of the maglev train requires four different elements, including the vehicle, power supply, communications systems and track. The tests allowed simultaneous testing of each element, with a large amount of data collected that will feed into further research.

“Under the test conditions of multiple scenarios, the suspension guidance of the vehicle is stable, and the operating condition is good,” Ding says. “The key technical indicators meet the design requirements and the design expectations.”

Five test cars are currently under development, with a full prototype capable of 600km/h operation expected to be completed by the end of the year.

Last year, China announced plans for a 200km maglev line in Hubei province to test operation of the prototype train at speeds in excess of 600km/h.