The three trains are from an order for 14 from four French regions. 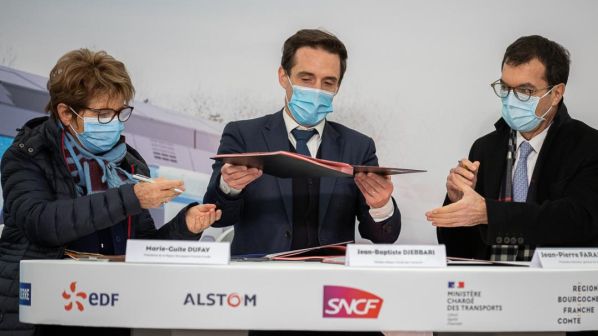 The units will start test running in 2024 on the 19km non-electrified Auxerre - Laroche - Migennes line. The units will be part of a collective order for 14 similar trains from four regions: Bourgogne-Franche-Comté, Auvergne-Rhône-Alpes, Grand-Est and Occitanie. The contract is worth €190m.

The trains will be built at Alstom’s Reichshoffen plant in north-east France, which the manufacturer is selling, with discussions with Škoda Transportation underway. Alstom says it will produce the hydrogen traction equipment at its Tarbes site and cooperate with the buyer of Reichshoffen on future hydrogen train projects based on the Coradia Polyvalent platform.

The French government reaffirmed its commitment to developing hydrogen infrastructure for rail by confirming a €47m grant on January 28.