30 LRVs for DVB to enter commercial operation from spring 2022. 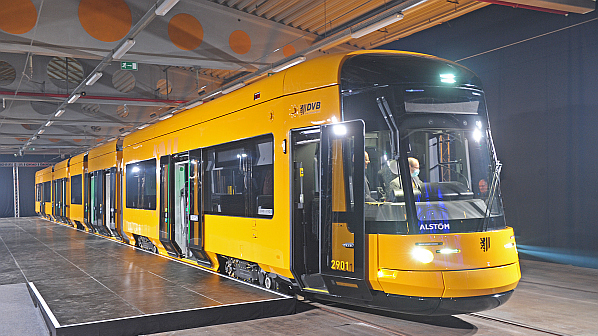 DRESDEN Transport Authority (DVB) has unveiled the first of 30 Alstom Flexity Citytrams at its Gorbitz depot ahead of entry into service on Line 2 next spring.

The low floor 70km/h, 43.5-m long, 2.65m-wide LRV has been manufactured in Bautzen. The €197m contract includes a 20-year maintenance service and delivery of spare parts, and an option for another 10 LRVs.

Of the 30 LRVs, nine bi-directional sets will have doors on both sides and fewer seats. Despite being 1.5m shorter than previous LRVs, the 21 uni-directional LRVs have capacity for an additional 30 passengers because they are slightly wider. The LRVs seat 96 passengers with a further 194 standing. There is also space for wheelchairs and prams. The LRVs are also fully accessible due to their low floor entrances.

The LRVs have six wide sliding doors designed for quick dwell times. On-board the LRVs are fitted with LED lighting and air-conditioning.

The five-section articulated LRV feature specially designed bogies and are powered by eight motors with an output of 95kW each (total: 760kW). They are powered by 750V dc overhead lines.

The first LRV is undergoing testing ahead of authorisation by the regional authorities, with this expected to be completed in the first quarter of 2022. The vehicles will debut on Line 2 between Kleinschachwitz and Gorbitz.

DVB is expected to withdraw the final Tatra T3 high-floor LRVs still in traffic following introduction of the new fleet.

For detailed data on light-rail orders from around the world, subscribe to IRJ Pro.