First of 35 LRVs for Ostrava unveiled

Škoda delivers the first of 35 LRVs ordered for Ostrava under Koruna 1.7bn contract. 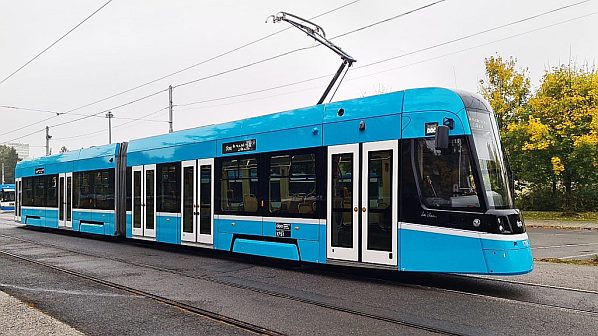 THE first of 35 Škoda 39T LRVs was unveiled in a joint ceremony between the Czech manufacturer and Dopravní podnik Ostrava (DPO) on October 6.

The 36-tonne low-floor LRVs are 26.6m-long, 3.6m-high and capable of 80km/h. They have capacity for 60 seated passengers and 140 standing. The LRVs have fully rotating bogies and low-axle pressures that are designed to reduce wear on the track. Each low-floor LRV has five double-leaf doors enabling quicker boarding and alighting of passengers. Air-conditioning and USB ports are being fitted to the fleet.

The contract is worth Koruna 1.7bn ($US 77.3m) and includes an option for a further five LRVs. The first two LRVs are being built in Pilsen, and the remaining 33 at the Škoda Ekova plant in Ostrava.

Testing will begin in Ostrava, where the first of the LRVs has arrived. No date for an entry into traffic has been given.

For detailed data on light-rail orders from around the world, subscribe to IRJ Pro.