The fleet comprises the first new electric trains built for Latvia since 1989. 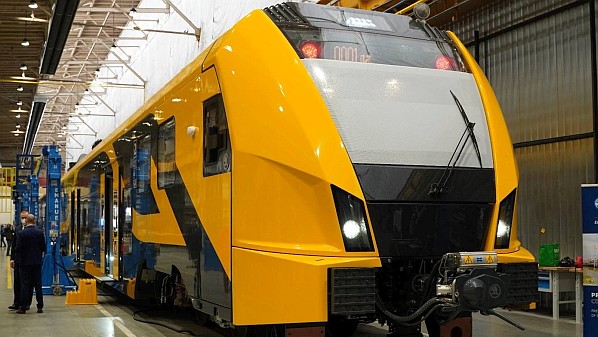 THE first of 32 new EMUs which Škoda Transportation is supplying to Latvian passenger operator Pasažieru Vilciens (PV) was unveiled by Latvian transport minister, Mr Tālis Linkaits, in a ceremony at the Škoda Vagonka plant in Ostrava, Czech Republic, on February 23.

The four-car 1520mm-gauge trains are being built under a €241.9m contract awarded in July 2019. The Ministry of Transport says production is on schedule and that the first train will arrive in Latvia in the spring, with entry into passenger service expected in the autumn. The EMUs will be used on services from Riga to Aizkraukle, Tukums, Skulti and Jelgava.

Electrical testing of the first train has been conducted at the Ostrava plant, where 13 vehicles are being assembled and painted, with a further 18 in the mechanical engineering and welding shops.

At the end of 2021 infrastructure manager Latvian Railways (LDz) launched a programme of platform modifications at 48 stations to accommodate the new trains. This will improve access for passengers with reduced mobility and those with pushchairs and large luggage.

The Škoda EMUs are the first new electric trains to be built for use in Latvia since 1989. Deliveries are due to be completed by the end of 2023.

A feature looking at planned investment in Latvia will be published in the March edition of IRJ.