GOAHEAD is set to use trains hired from three operators on Stuttgart - Nuremberg services, one of three new lines it will operate from the December 15 timetable change, rather than the 11 new Stadler three-car Flirt3 XLs ordered for the service. 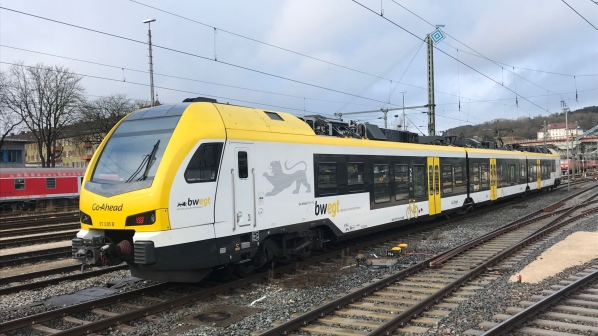 The standard Flirt EMU fleet is due to enter service on December 15.
Photo Credit: Keith Fender

Technical problems with the Stadler Flirt EMUs delivered for GoAhead’s initial Stuttgarter Netze contracts, which commenced in June, led to service disruptions and negative publicity for the new operator.

In light of this, GoAhead decided not to introduce the new Flirt3 XL trains on the Stuttgart - Nuremberg route immediately, and will instead deploy locomotive-hauled trains made up of old German Rail (DB) coaches and a variety of electric locomotives including relatively modern class 185.5 Traxx units and older former DB locomotives.

GoAhead Germany confirmed to IRJ that it had agreed contracts with Wedler Franz Logistik (WFL), TRI Train Rental and Centralbahn to use their trains provisionally until March 2020 while the Flirt3 XL fleet is fully commissioned.

As well as RE 90 Stuttgart - Nuremberg, GoAhead is set to begin operating another semi-fast regional express services, RE8 Stuttgart - Würzburg, along with the slower RB16 Stuttgart - Ulm regional service.

The Flirt3 XL trains ordered for RE90 services have longer car bodies than the rest of the GoAhead Flirt fleet. Each 67.6m-long three-car train can seat 210 passengers compared with 165 passengers in a standard three-car Flirt3.

Stadler confirmed to IRJ that all 11 of the Flirt3 XL EMUs have been delivered and are approved for use. Stadler says it was the customer’s decision not to use the new fleet immediately but to instead undertake an intensive period of testing and commissioning.

GoAhead will use fully-commissioned Flirts on the RE8/RB16 routes, but will continue to hire two double-deck push-pull trains previously operated by DB Regio on the Stuttgart to Karlsruhe IRE 1 route - as they have since June - until April, resulting in a delay to the planned extension of IRE 1 services from Stuttgart to Aalen.