SWEDISH transport operator Gothenburg Tramways (Spårvägar) has received delivery of the first Bombardier Flexity LRV from a fleet of 40 ordered in April 2016 from a consortium of Bombardier and Kiepe Electric. 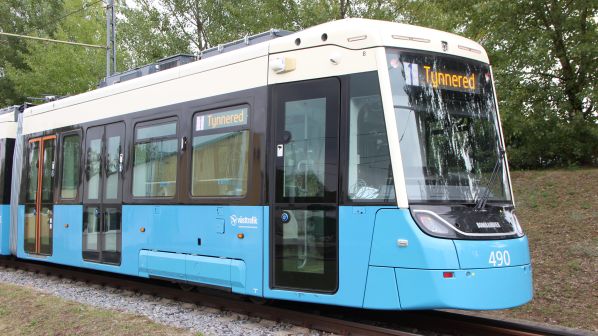 The remaining vehicles, designated as type M33 by Spårvägar, are currently being built at Bombardier’s facility in Bautzen, Germany, for delivery by 2022.

The 33m-long LRVs are capable of top speeds of 70km/h and have space for 220 passengers. The vehicles are equipped with Bombardier Flexx bogies combined with a Kiepe-Electric propulsion system which offers increased energy efficiency and reduced maintenance costs compared with the network’s older vehicles.

The vehicles feature low floors for easy access to all passengers, double glazed windows and an electric ramp to assist wheelchair users. The LRVs are also manufactured using recyclable materials and finished with water-soluble paint to reduce the fleet’s environmental impact.

The M33s will be gradually phased into operation on the city’s 160km light rail network, which is the largest in Sweden. They will replace older type M28 LRVs, built by ASJL and ASEA between 1965 and 1967, and type M29s, built by Hägglund between 1969 and 1972.