GERMANY: A fleet of three-car Siemens Mireo trains have received initial approval from the German Federal Railway Authority (EBA) to operate on the Offenburg - Freiburg - Basel/Neuenburg (Rhein) line in the state of Badem-Württemberg. The approval comes in time for the planned timetable changes on June 14. 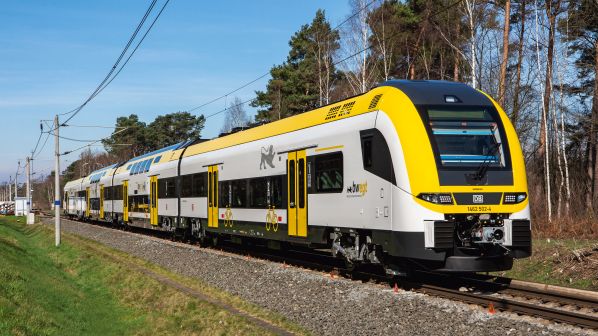 DB Regio placed the order for the 160km/h articulated trains, the first for the Mireo multiple unit platform, in February 2017. Each set seats 220 passengers. The trains are also fitted with onboard diagnostics equipment, the data from which supports a predictive maintenance strategy.

“We are pleased that from mid-June, our passengers will be able to get to their destinations in new trains much faster than before in local transport,” says Mr David Weltzien, chairman of DB Regio Baden-Württemberg.

Alongside the 24 Mireo trains, Siemens is also supplying 15 new Desiro HC double-deck trains to operate as an express service on the Karlsruhe - Offenburg - Freiburg - Basel route.

Belarus: Pesa’s 760M six-car DMUs have been certified for regular operation by national operator Belarusia Railway (BC), according to Eurasian Economic Union regulations. In addition to allowing the Polish manufacturer to supply this model to Belarus, the manufacturer could supply the model to other CIS countries which use 1520mm gauge.

This is the first supply agreement between the companies, and the first acquisition of specialised new-generation cars by the Siberian operator.

“The Siberian region serves as one of Russia’s largest transport and transit hubs,” says Mr Oleg Balakirev, CEO at Transport Logistics Systems. “In order to work effectively in this highly competitive environment, companies require not only efficiency and high professional standards from their teams, but also modern rolling stock. The rolling stock we have acquired will allow us to ensure the uninterrupted export of our clients’ products, while reducing transportation costs per tonne of transported product.”

The locomotives will be built at the company’s Novocherkassk Electric Locomotive Plant (NEVZ) in Rostov and will enter service this year. The units will join two other 3ES5K models purchased by Uzbekistan Railways in 2018.

Germany: Rheinbahn have been authorised to operate Bombardier Flexity high-floor LRVs for passenger services within the Dusseldorf metropolitan area.

The trams, which were ordered by the company in 2015, are part of an initiative to improve light rail services in the city.

“We are delighted to have reached this important commissioning milestone. This will support our efforts to condense tram traffic cycles in Düsseldorf, planned for this year,” says Mr Michael Richarz, a member of the board of management for technology and operations at Rheinbahn. “With the new HF6 vehicles for the Rheinbahn, we are offering our passengers more services and more comfort.”