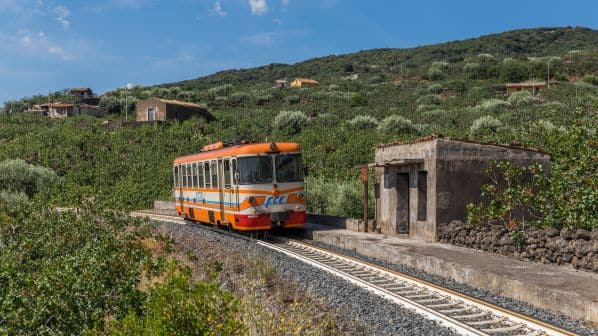 The Italian Ministry of Infrastructure and Transport (MIT) has published a tender for 15 HMUs for the 950mm-gauge Circumetnea Railway in Sicily.
Photo Credit: David Gubler

ITALIAN regional operators have published a number of tenders for new rolling stock, including hydrogen and battery-powered multiple-units.

Calabria Railways (FdC) has published a tender for the supply of hydrogen multiple-units (HMU). The tender includes a firm order for five trains worth €65m, along with an option for maintenance worth €3.5m.

The contract includes another option for three more HMUs worth €39m, again with the option of maintenance for €2.1m. The trains are to be delivered by the end of 2026. Bids must be submitted by February 13.

The Sardinian Regional Transport Company (ARST) has published a tender in the Official Journal of the European Union for the purchase of three HMUs worth €39m with an option for five more worth €65m. The trains will operate on ARST’s 950mm-gauge network and bids are to be submitted by January 31.

ARST has also published a separate tender worth €16.3m for a single HMU, also to be deployed on the 950mm-gauge network, for which bids must be submitted by February 7.

For its light rail networks, ARST has published a tender for three 28m LRVs for the Sassari Metro and seven 33m LRVs for the Cagliari Metro. The contract value is estimated at €35.4m and bids must be submitted by March 28.

The Italian Ministry of Infrastructure and Transport (MIT) has published a tender for 15 HMUs for the 950mm-gauge Circumetnea Railway in Sicily. The contract has an estimated value of €276m including maintenance. Bids must be submitted by March 3.

Abruzzo public transport operator TUA has published a tender for a six-month framework contract for up to 10 battery-electric multiple units (BEMU) for regional services. The €112.4m contract includes a firm order for three vehicles. Bids must be submitted by February 27.

The Lazio region has ordered more EMUs from Titagarh Firema. The manufacturer and region signed a third contract on December 24 for the supply of five six-car MetroMare EMUs for the Rome - Lido di Ostia route. The contract, worth almost €43m, covers the five remaining trains from a framework contract for 38 EMUs awarded at the beginning of 2022.

For detailed data on fleet tenders and orders from around the world, subscribe to IRJ Pro.