Freight railways aim to modernise hundreds of locomotives and increase use of energy-management technology. 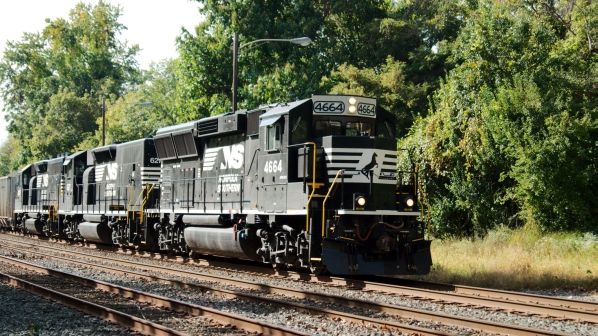 Norfolk Southern has ambitious targets to modernise hundreds of its locomotives to cut down on their CO2 emissions.
Photo Credit: Shutterstock/Andy Borysowski

Scope 1 emissions are those occurring from sources controlled or owned by an organisation, such as  fuel combustion by diesel locomotives, whereas Scope 2 emissions are indirect and relate to emissions associated with the purchase of electricity along with heating and cooling.

Among the measures NS has undertaken to lower emissions are: modernising more than 100 locomotives each year, a programme started in 2016 which aims to upgrade 950 locomotives by 2025; and equipping 93% of its active locomotive fleet, or 1550 locomotives, with energy-management technology.

NS has also fitted distributed power systems to a further 120 locomotives so that they can be positioned in the centre or at the end of trains rather than only at the front, helping to reduce the physical forces on wagons. It has used data to identify and eliminate over 2000 hours of engine idling per day, conserving in excess of 11.8 million litres of fuel annually, and is using biofuel blends to reduce carbon intensity.

NS says it has also improved locomotive fuel efficiency by 7% since 2019; diverted more than half of its waste from landfill; reclaimed over 1.6 million gallons of used oil; tracked and managed more than 4500 waste and recycling events from service providers; recycled 100% of rail replaced with new rail that itself is made of 70% recycled material; and recycled 100% of its old sleepers and 100% of steel.

The railway’s other sustainability initiatives over the last two years include a next-generation carbon calculator that helps determine a shipment’s carbon footprint and a partnership with US wagon manufacturer Greenbrier to produce a more sustainable gondola wagon for transporting loose bulk materials.

NS says these collaborations are at the heart of its sustainability strategy. “We know it will take a collaborative effort to reach the environmental goals required to protect our planet for future generations,” says Norfolk Southern chief sustainability officer, Mr Josh Raglin. “The more companies work together across their supply chain, the quicker we can achieve measurable progress.”

CSX - which currently operates nearly 31,300 route-km which will grow to 33,700 route-km across 26 states after it purchased short-line operator Pan Am Systems earlier this year - says it has been working to reduce its greenhouse gas emissions by 37.3% by 2030, using 2014 as an emissions baseline.

Its other initiatives include evaluating new locomotive fuel technologies and developing operational efficiencies. CSX is also testing hybrid locomotives and the use of biofuels such as B20 and potentially liquefied natural gas. The company says it is working on a concept that would use compressed natural gas to supply a generator that in turn would supply power for locomotives.

In addition, a “Meet Pass Planner” programme aims to reduce delays where trains have to wait while scheduled to meet each other at passing loops, at the same time optimising train routing and performance.

Another of CSX’s goals is to increase its use of renewable energy to 50% of its scope 2 footprint through energy audits, energy efficiency retrofits, renewable energy consumption and partnerships. CSX has entered into community solar agreements and is purchasing renewable energy credits and finding power purchase agreements to promote sustainability. It also plans to reduce hazardous waste from its ongoing operations by 30% and reduce landfill waste to less than 10% of total volumes.

Other CSX initiatives are recycling more than 9 million litres of used oil from locomotives and other equipment, pioneering an innovative method for reusing sleepers by chipping them for use as an alternative fuel or to be reused as landscape timbers, and managing the recycling of computers, monitors, modems, mobile devices and servers – equipment in good condition is reused while obsolete equipment is broken down into parts and recycled.

“By continuing to invest in our people and communities, innovating to introduce new environmental solutions, and expanding our network capacity and service offerings, we have positioned CSX to accelerate highway-to-rail freight conversion while adding to a solid operating foundation that will support CSX’s future growth and our ability to create lasting value for our stakeholders,” says Mr James M Foote, CSX president and CEO.