The fleet of DDZ EMUs was withdrawn in December 2020 following reports of excessive vibrations. 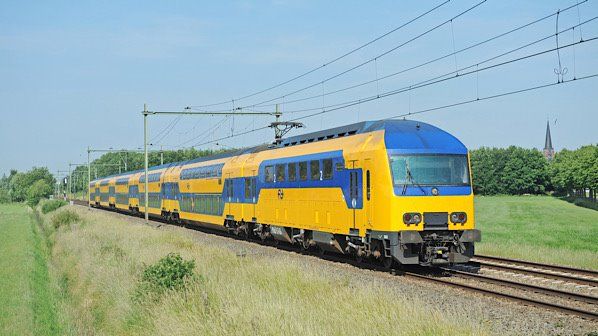 NETHERLANDS Railways (NS) began to gradually reintroduce the first of 49 inter-city DDZ double-deck EMUs into regular operation on December 6 after the entire fleet was withdrawn from service in December 2020.

The withdrawal was a precaution by NS prompted by complaints from drivers of excessive vibrations during operation at the maximum operating speed of 140km/h. The absence of the fleet had no tangible impact on operation due to restricted service levels caused by the Covid-19 pandemic. NS has informed Dutch national railway safety authority ILT about the situation.

The first trains were reintroduced on Roosendaal - Nijmegen - Zwolle IC services. The 49 three or five-car double-deck DDZ compositions are coupled with a single deck BoBoBo power car with automatic central couplers. NS consulted with TÜV to identify the issue. The investigation found that the excessive vibrations were caused by a combination of the degradation of both wheels and track, with the wheel wear found to be particularly irregular.

During their time out of service the coaches have been fitted with new brakes following extensive testing on a single DDZ train. The power car’s block brakes have also been replaced with disk brakes. In addition, real-time condition monitoring equipment has been installed to collect various technical data during running, which is sent to Netherlands Railways train maintenance subsidiary Nedtrain. The trains are also set to receive a more intensive maintenance programme.

The DDZ fleet, which was built between 1992 and 1998, was refurbished between 2009 and 2014, and NS has already launched a market consultation process to replace the trains, which is expected in 2026.