RHAETIAN Railway (RhB), Switzerland, has exercised an option with Stadler for an additional 20 Capricorn EMUs. 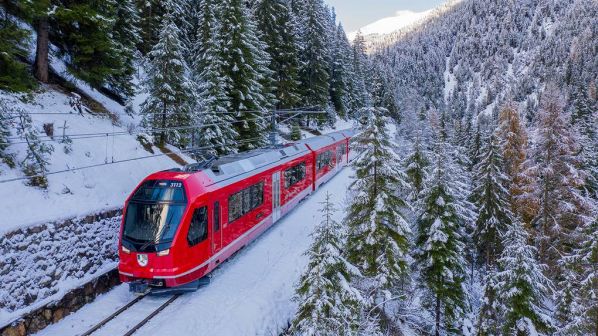 The first Capricorns are planned to begin operation this year on the Landquart - Davos - Filisur route from late autumn, having been unveiled in April 2019. Further trains will be introduced between Landquart -Klosters - Davos/St Moritz route in 2021.

Designed for RhB’s 1,000mm narrow-gauge network, which is located in the Swiss canton of Grisons, the trains can reach a maximum speed of 120km/h.

The trains will feature automatic coupling to expedite operation, enabling two trains to operate in multiple along the network’s single-track sections, before splitting in transit to proceed to different destinations.

RhB hopes that the new 76.44m EMUs will improve efficiency, comfort and accessibility for passengers, offering 164 seats, including two spaces for wheelchair users and 35 first class. They will be equipped with power outlets and a passenger information system, as well as multifunctional compartments for large items such as bicycles, pushchairs and luggage. Accessibility is enhanced by wide doors and low-floor access for entry and exit.

“The Rhaetian Railway and Stadler have been working together over decades already,” says Mr Ansgar Brockmeyer, head of sales at Stadler. “We’re proud that they have decided to modernise their fleet with our robust and high-quality trains, and that we can now deliver a total of 56 Capricorns to the Grisons.”