The technology is expensive to maintain and has caused passenger complaints. 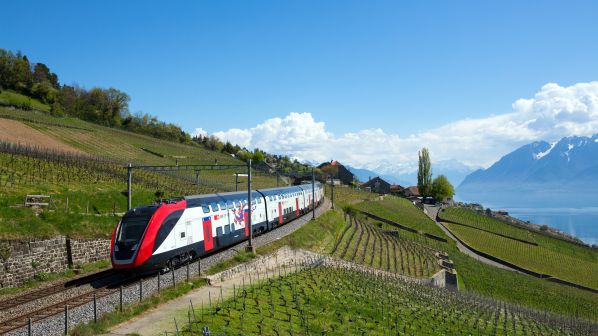 SWISS Federal Railways (SBB) has announced it will abandon plans to use roll compensation technology (Wako) on the long-distance double-deck FV-Dosto trains supplied by Bombardier Transportation to reduce journey times on the Berne - Lausanne and Winterthur - St Margrethen routes.

SBB has instead applied to the Federal Office of Transport (FOT) to modify the 2035 timetable, when the new technology was expected to reduce journey times on the two routes by five and two minutes, respectively.

The system uses a roll support pendulum situated above the bogie to reduce centrifugal force, which was supposed to enable a 15% higher curving speed. But the technology has led to complaints from passengers and staff since it was introduced in 2018.

SBB says its decision to use Wako was based on the technical knowledge available at the time, as well as promising studies and successful test runs with converted IC2000 trains. The Wako system was considered “the technology of the future” that would allow shorter journey times with higher-capacity trains. However, SBB says the past 10 years have shown that while technology for niche markets and highly complex products such as Wako are technically feasible, they are comparatively error-prone and more expensive to maintain, and are therefore not sustainable.

Test runs with the FV-Dosto also made it clear that the ride comfort would not be satisfactory for either customers or SBB.

SBB says it is now relying on proven rolling stock and technology in its updated fleet strategy, under which the FV-Dosto fleet will be replaced with standard rolling stock at the end of its service life in the mid-2040s. The strategy envisages a gradual reduction in train types in SBB’s fleet from 20 to six or seven, which will reduce complexity and costs.

Wako technology is designed to perform three functions: allow higher speeds through curves, improve passenger comfort, and provide better stability in crosswinds. The trains will retain the crosswind functionality and SBB has commissioned Alstom, which purchased Bombardier Transportation in 2020, to examine other options to increase passenger comfort and create a smoother ride.

“The abandonment enables greater flexibility and reliability in rail operations,” says Mr Linus Looser, head of passenger transport production at SBB. “If an FV-Dosto fails, another type of train can be used without increasing the journey time.”

SBB has already invested SFr 32m on the Berne - Lausanne route to prepare for operating at faster speeds through curves, but after discussions with the FOT will undertake no further spending.

While the planned journey time reductions on the Berne - Lausanne and Winterthur - St Margrethen routes will be lost, SBB is continuing to explore other options. These includes prioritising the construction of a new line between Berne and Lausanne, with a study commissioned by the federal government expected to be completed by autumn 2022. A study is also to be commissioned for the Winterthur - St Margrethen route.