The move could cut CO2 emissions by 60% and particulates by 80%. 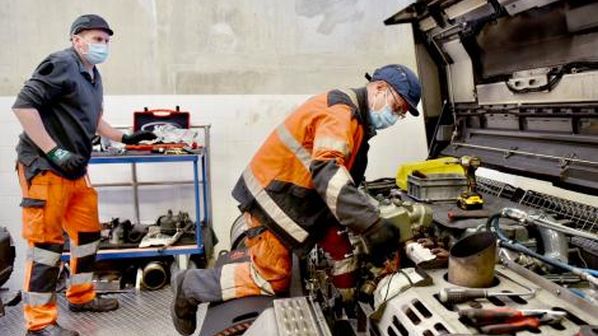 A fleet of 15 Alstom Régiolis six-car articulated bi-mode multiple units operate services on the line. The trains were built in 2014 and are equipped with six roof-mounted 338kW MAN D2676 LE323 diesel engines. The trains operate in electric mode over the 82km Paris Montparnasse - Dreux section, running under 1.5kV dc and then 25kV ac electrification, before switching to diesel mode for the remaining 246km section from Dreux to Granville.

Following trials with a 30:70 mix of rapeseed and diesel oil, the use of B100 oil made from 100% rapeseed was sanctioned for use in trains in France in 2018, after being used in lorries.

The trials on trains in commercial service were approved after the French Institute of Petroleum and New Energies (IFPEN) carried out tests in 2019 with one of the MAN engines on a test rig without significant modifications. Testing has far found that consumption of rapeseed oil is slightly higher than for diesel.

The trials are part of SNCF’s Planeter project to reduce CO2 emissions from trains used on TER regional services, with 61% of current emissions stemming from the use of diesel engines. Replacing diesel with B100 is expected to cut CO2 emissions by 60% and particulates by 80%.

The rapeseed oil, produced by Valtris Camplor in Verdun, is supplied to SNCF by Bolloré Energy.

SNCF is due to carry out similar tests with Bombardier AGC dual-mode multiple units equipped with MAN 662kW D2842 LE606 engines on the Paris Nord - Laon line. A third test is under consideration, which would use rapeseed oil to power Fret SNCF BB 60000 diesel locomotives, which are equipped with a 1000kW Caterpillar CAT 3508B engine. The locomotives are used for shunting and services in the Dunkerque port area.

A trial is also due to be launched next winter on the Besançon - Morteau line, where temperatures often fall as low as -20°C to observe the effects of very cold temperatures on the viscosity of rapeseed oil.

Depending on the results, SNCF will consider extending the replacement of diesel fuel with rapeseed oil.

France has 1.1 million hectares of land dedicated to rapeseed production, with each hectare producing around 500l of edible oil, 1000l of less refined fuel oil and 1900kg of animal feed. While France produces enough edible oil to meet national demand, the French agricultural industry is looking to increase to production of rapeseed for animal feed to replace soya imports, which would likely increase the quantity of fuel oil available for transport.