STADLER has delivered the first of 14 class 76 Flirt hybrid trains that will be operated by SJ Norge to Skien, Norway, where it will undergo testing before the fleet is introduced in the Trøndelag region throughout 2021. 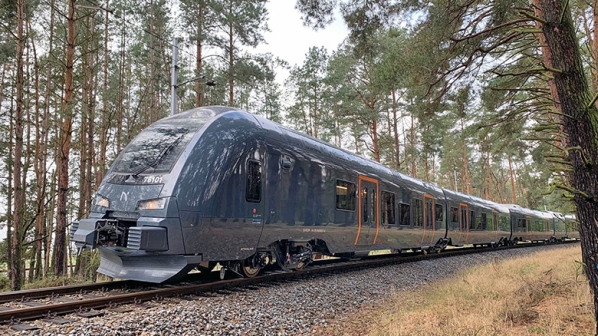 The fleet is due to be introduced in 2021.
Photo Credit: Stadler/Norwegian trains

The class 76 trains offer 241 seats compared with 136 seats on the class 92 diesel trains that currently operate between Støren and Steinkjer and on the Røros line. The fleet is expected to reduce emissions by up to 30% per passenger journey.

The 160km/h trains, which are owned by state-owned rolling stock company Norske Tog, are similar to the class 74 and 75 trains that operate in the south of Norway, but have a short intermediate car to house the diesel engine and batteries, and have a range of up to 870km.

“It is a close collaboration between us at SJ and Norske Tog that owns the train sets,” says SJ project manager, Mr Terje Bulling. “Even though we have had Flirt trains in Norway for several years, this train is something completely new.” Staff from Stadler are also based at the test facility in Skien during the test programme.

The trains will undergo extensive winter testing on the Bergen, Røros and Nordland lines, before potentially beginning passenger services in late summer.

Infrastructure manager Bane Nor is now working to prepare for the introduction of the new trains, including upgrading up to 22 station platforms by April 2021. This involves permanent changes at Lundamo, Skansen, Ranheim, Vikhammer, Åsen, Røstad and Røra, and temporary changes at other stations until major measures can be implemented.