First Baltiets train is due to arrive for testing during September. 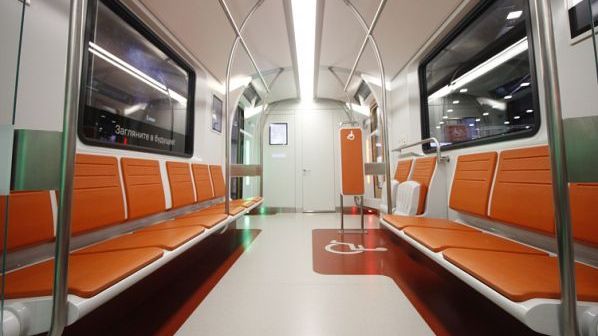 How the interior of one of the new St Petersburg Metro Baltiets cars will look.
Photo Credit: IRJ

ST Petersburg Metro has signed a contract with Transholdleasing to lease 950 new metro vehicles for the city’s network. The trains are being manufactured by the Oktyabrsky Electric Car Repair Plant (OEVRZ), a subsidiary of Transmashholding (TMH), and testing of the first set is set to begin in St Petersburg this month.

The total value of the 25-year contract is Roubles 242.6bn ($US 3.9bn), financed by the National Wealth Fund and Russian investment company and development institute VEB. The trains will be delivered between 2022 and 2031.

The new trains, which were initially given the name Smart, will replace trains which are now 40-50 years old. A new Smart train was unveiled to the public at an exhibition in June 2019, design having begun in 2018 by Integral Design and Development of Spain.

In spring 2021 it was announced that St Petersburg Metro would purchase 950 Smart cars to upgrade its rolling stock fleet and assembly of the first train began in March 2022. Earlier this month it was reported that the train name would be changed from Smart to Baltiets.

The Baltiets trains will consist of three vehicle types: 81-725.1 leading motor cars with driving cab; 81-726.1 intermediate motor cars; and 810727.1 unpowered trailer cars. These vehicles will be formed into a mix of eight-car and six-car trains.

Among the key features and innovations of the new trains are a stainless-steel body, an asynchronous traction drive that saves up to 30% of electricity compared to dc motors, and an electrodynamic braking system avoiding use of brake pads but instead using regenerative braking. Other features are maintenance-free inter-car couplers, and a ventilation system incorporating air disinfection and providing uniform distribution of air flow. The trains will be able to operate autonomously over up to 200 metres to assist with shunting in depot sidings.

The driver’s cab is fitted with an ergonomic vibration-absorbing chair and a control panel featuring a colour touch screen terminal and controls for the air- conditioning, air disinfection and heating systems. Passenger seating is designed to be ergonomic, while the trains incorporate improved noise and vibration absorption systems. The end cars also have special areas for wheelchairs.

Leading cars of the trains will carry an illuminated St Petersburg Metro logo together with an electronic route indicator, while there will be LCD screens displaying passenger information over the doors inside the trains.

More than 95% of the train’s components have been supplied by Russian companies.