The lead car of new train was displayed at Yaroslavsky station in Moscow from July 1 to 4. 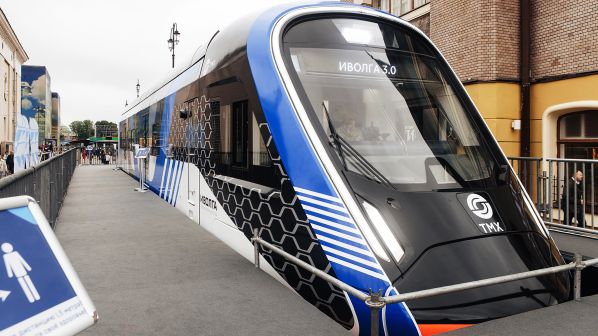 The 160km/h Ivolga 3.0 has been developed by TMH subsidiary Tver Carriage Works and was designed by TMH’s partner, the National Centre for Industrial Design and Innovation (2050.Lab). Compared with the previous model, which has been deployed on suburban lines around Moscow including the Central Diameters, the new 11-car trains will offer 50 additional seats, all of which are equipped with charging points for devices and folding armrests. Seating has been rearranged in the while the train features open gangways and space in the lead car for charging and storage of electric bikes and scooters.

The train can support 4-12-car configurations and can operate in multiple. TMH says the train can change its direction of movement in 1-2 minutes and a survey of visitors to the exhibit was planned with the results set to be transferred to design groups working on the project.

“We are pleased to present to passengers a new development, which is being created within the framework of the platform of Russian trains operating in the surface metro mode - the Ivolga 3.0 train,” says Mr Alexandr Loshmanov, deputy general director for passenger transport at TMH. “We hope that passengers will appreciate the high level of technological solutions developed by the engineers and designers.”