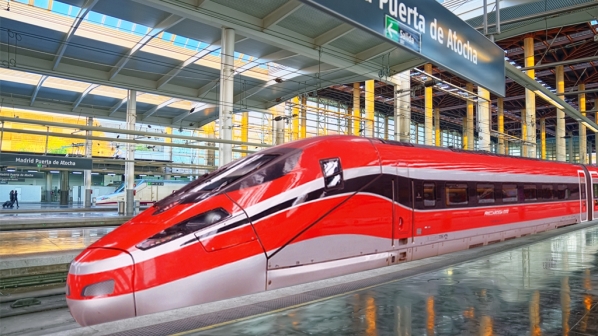 The contract is worth €797m, with Hitachi Rail and Bombardier taking a 60% and 40% stake respectively. Bombardier’s share is worth €319m.

The 23 new trains for Ilsa will be designed and built by Hitachi Rail and Bombardier in Italy. Each 200m-long train will have capacity for around 460 passengers and will be capable of commercial speeds of up to 360km/h. The trains will feature state-of-the-art aerodynamics and energy saving technologies, along with Wi-Fi, a bistro area and high levels of comfort in all classes.

Under the conditions ordered by the European Commission when it approved Alstom’s purchase of Bombardier Transportation, Bombardier’s contribution to the V300 Zefiro high-speed train and its IP licence will be offered to Hitachi.

Ilsa will launch high-speed services on the Madrid - Barcelona, Madrid - Valencia/Alicante and Madrid - Seville/Malaga/Grenada lines on March 1 2022, after it was awarded one of three packages to operate on the Spanish high-speed network by infrastructure manager Adif in November 2019. Ilsa will operate alongside incumbent Spanish operator Renfe, and Rielsfera, a subsidiary of French National Railways (SNCF), which will launch services under the new packages at Easter 2021.

As well as high-speed, Ilsa plans to compete with incumbent Renfe on medium-distance services in Andalucía by offering an additional stop in Córdoba on its Madrid - Seville and Madrid - Malaga services. Renfe operates on the routes under a public service obligation (PSO) contract with the Spanish Ministry of Transport, Mobility and Urban Agenda signed in 2018.

Rielsfera, in a similar notice to the CNMC, says it also plans to compete with Renfe on medium distance services by offering a stop in Tarragona on its Madrid - Barcelona high-speed service.

Any competing service on either of the routes must not subtract any more than 2% of the income Renfe obtains from operation. It must also be approved by the CNMC, which is set to commence an investigation to determine the possible impact. CNMC says Ilsa and Rielsfera will have free access to offer medium distance services if they do not reduce Renfe’s income by more than 1%. If the impact is between 1% and 2%, Ilsa and SNCF’s offer will depend on increasing the number of new passengers on the route by more than 30%.

For detailed data on high-speed fleet orders from around the world, subscribe to IRJ Pro.