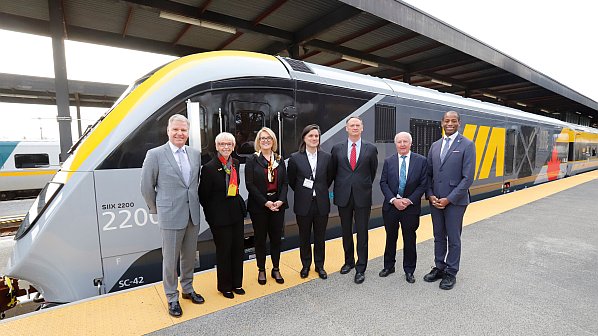 The launch of the first Siemens Via Rail train.
Photo Credit: Via Rail/Twitter.

VIA Rail Canada launched the first of its 32 Siemens trains in Ottawa on November 30. The fleet will operate on the Quebec City – Montreal - Toronto - Windsor corridor as part of a $C 989m ($US 781m) contract awarded in 2018.

Siemens is building the trains in Sacramento, California. Testing of the first train begins this month and Via Rail plans to put them into passenger service during the fourth quarter of 2022.

The push-pull trains are formed of five coaches with power supplied by a 3100kW Siemens Charger locomotive fitted with Cummins QSK95 16-cylinder Tier 4 diesel engines. The entire fleet is expected to be delivered by 2024 and will replace existing life-expired trains.

At the launch event, it was stated that delivery was on time and that this would allow the train to be tested in the harsh Canadian winter.

The fleet is also fully accessible for passengers with reduced mobility. Braille seat numbering has been fitted to the interiors along with companion seating, at-seat emergency call buttons, larger fully accessible toilets and an integrated wheelchair lift.

“Canadians have relied on Via Rail to connect them for years,” Canada’s Transport Minister Mr Omar Alghabra said. “The new fleet will offer a new era of comfort and efficiency for the workers, families and tourists who travel on these tracks.”

For in-depth data on new fleets in North America, subscribe to IRJ Pro.