500 of the 1000 locomotives modernised are for Norfolk Southern . 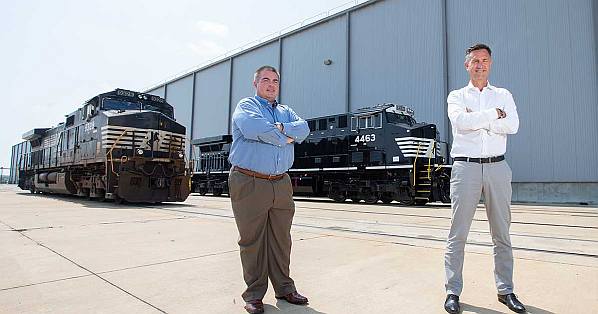 WABTEC completed the modernisation of its 1000th locomotive in North and South America at the beginning of August.

The company marked the milestone on August 6 with the delivery of an AC44C6M 4463, a rebuilt 1998 GE Dash-9 locomotive, to Class 1 railroad Norfolk Southern (NS). 500 of the 1000 locomotives modernised so far are from NS.

Wabtec says locomotives that have been through the process record up to 25% improvement in fuel efficiency, more than a 40% increase in reliability, up to 55% increase in haulage ability and up to a 20% reduction in maintenance, repair and overhaul costs.

The supplier also calculates that the 1000 locomotives will have reduced carbon emissions by more than 1.4 million tonnes since 2015.

The modernisation program also reduces emissions by reusing the existing steel on the locomotive through a requalification and remanufacturing process. “More than half of a locomotive’s critical components are reused, rebuilt, or remanufactured at least three times over their useful life,” Wabtec says. The company’s locomotive plants in Erie, Pennsylvania; Fort Worth, Texas; and Contagem, Brazil, have reused more than 100,000 tonnes of steel to update the 1000 locomotives.