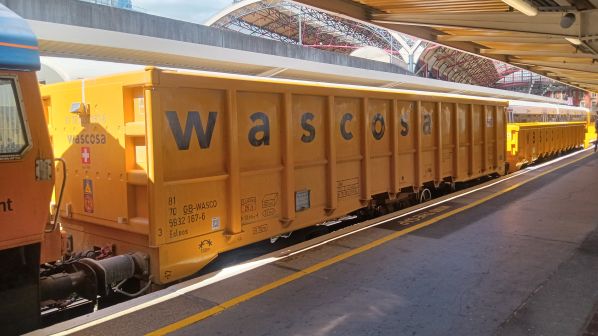 WAGON leasing company Wascosa presented the three wagon designs that it is supplying to British infrastructure manager Network Rail (NR) during an event held at London’s Victoria station on June 28.

Wascosa won the contract in partnership with GB Railfreight (GBRf), the British freight operator that has a long-term contract to haul NR’s infrastructure maintenance trains.

Deliveries began 12 months after contract was awarded and are due to be completed over the following 12 months.

Production is being undertaken by Greenbrier Europe. The JNA and MLA box wagons are being built at the AstraRail plant in Arad, Romania, while the FEA flat wagons are being produced at Świdnica in Poland.

Deliveries are being managed by Raillogix, with GBRf responsible for haulage through the Channel tunnel from Fréthun in France to Dollands Moor in Britain.

The JNA box wagon for carrying ballast is a standard British design with a capacity of 60m3, although Wascosa points out that its latest build for NR features a stronger body. The JNA rides on TF25 track-friendly bogies.

The MLA box wagon has a capacity of 43m3 and has been specially developed for NR. It will also be used for carrying ballast, and has Y25 bogies.

To carry other infrastructure materials on the 60ft (18.3m) FEA wagons with Y33 bogies, GBRf has ordered 260 bodies of three types: a flat module for carrying track panels and sleepers; a second design with drop sides for carrying switches and rail; and a unit equipped with bolsters and stanchions for carrying rail.

As the bodies can be removed from the wagons, the designs have been approved under ISO specifications for intermodal containers, rather than European Technical Specifications for Interoperability (TSIs).

“We are not dependent on the TSI approval process,” Wascosa CEO, Mr Peter Balzer, says. “It is more cost-effective.”

The bodies are assembled from three sections, which means that they can be loaded and unloaded using a forklift truck. They can also be stacked when not in use.

“This helps us to get the job done quicker,” says NR engineering services director, Mr Leevan Finney. “It saves time and it saves money.”

Maintenance of the new Wascosa fleet for NR is to be undertaken by Wabtec in Doncaster as subcontractor to GBRf.