AN agreement was signed in the Estonian capital Tallinn on May 29 by the railways of three Baltic states to launch a new intermodal freight service called Amber Train. 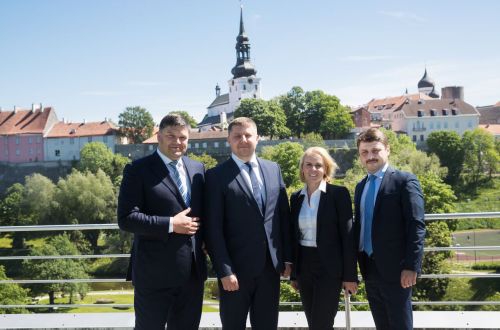 Amber Train has been launched in Tallinn by the railways of the three Baltic states.

The service will operate on the 650km 1520mm-gauge route linking Tallinn, Riga in Latvia, and the Lithuanian-Polish border at Šestokai, where containers will be transhipped to standard-gauge trains. The service will be managed jointly by Estonia’s state-owned freight operator EVR Cargo, Latvia’s LDZ Logistika, and Lithuanian Railways (LG).

The objective is to provide a fast and reliable rail freight connection between western and northern Europe using a single route to reach all three Baltic states, with a ferry connection to Finland.

“This is another sign that there is a demand for a north-south route, which in turn shows that we need Rail Baltica,” says Mr Erik Laidvee, chairman of infrastructure manager Estonian Railways.