GB Railfreight yesterday successfully completed tests of the first freight train to operate on the Ipswich Chord, a new 1km link north of Ipswich freight yard that provides a direct link from Britain's Great Eastern main line to the East Suffolk line. The link is due to officially open to commercial traffic on March 31. 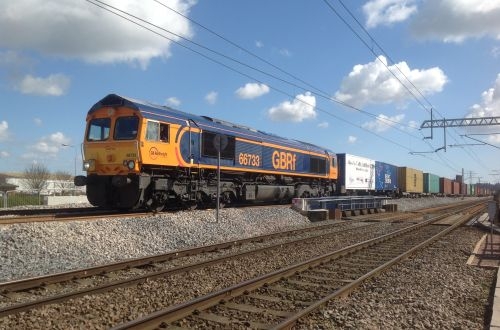 The £59m project was co-financed by the European Trans European Transport Network (TEN-T) programme and will enable freight services to avoid London, or a change of direction at Ipswich freight yard, when accessing the Midlands from the Port of Felixtowe.

The work is part of a larger project of upgrades to the Felixtowe – Peterborough – Nuneaton line, which include the addition of two 775m sections of track east of Ely station, signalling upgrades at Kennett/Bury St Edmunds, and loading gauge enhancements between Peterborough and Nuneaton, which were completed in April 2011. This work will increase freight capacity between Ipswich and Peterborough from 10 to up to 24 container freight trains per day, while providing the capability to run longer trains.