IN an effort to beef up security of its coal shipments, Polish State Railways (PKP) railfreight subsidiary, PKP Cargo, has introduced drones equipped with different types of cameras, including infrared, to carry out aerial surveillance of its trains. 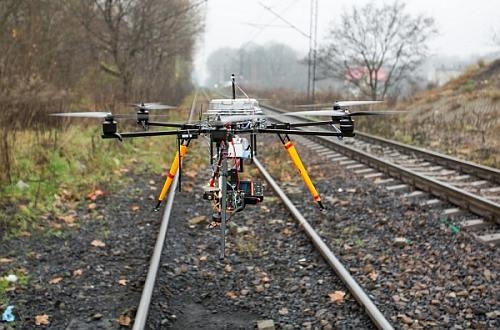 The railfreight operator has also introduced bolt-based wagon security features, which involves blocking door locks with standardised wires made from hardened steel. Tests of the new security feature on over 100 coal hopper wagons found no successful attempts to breach the new locks.

"Pilferage of bulk commodities moved by our company is a phenomenon we have been tackling for many years with annual losses amounting to as much as several million Zlotys," says Mr Maciej Borecki, head of security and the audit office at PKP Cargo. "In order to reduce the scale of this crime we have decided to step up preventative measures and use the latest technologies."

PKP Cargo says that first and foremost its security efforts are focused on prevention and it works closely with the Railroad Guards Service and the police. In 2014 a special threat prevention task force was established the main goal of which was to reduce losses incurred by PKP Cargo, operating predominately in the Silesian region where thefts are most common.

The task force works closely with PKP Cargo offices in the region to obtain information about which coal mine and according to what timetable a coal shipment leaves. Members of the task force together with the railway guards now regularly monitor the most vulnerable locations of its routes.

"As a result of our hard work, this year we have seen a gradual decrease in the number of such crimes compared with last year," Borecki says. "Between January and October we managed to reduce thefts of solid fuels by over 20% in terms of the number of incidents, quantities of stolen coal, and their value. I am convinced that measures we have currently launched will allow us to reduce this criminal activity further."