EUROTUNNEL's attempts to further develop railfreight services through the Channel Tunnel continued this weekend with the successful test of a Siemens Vectron locomotive. 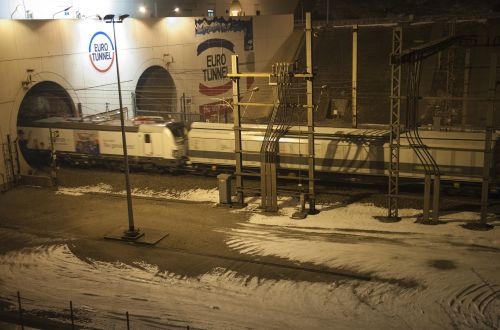 The unmodified four-axle 15kV/25kV ac Vectron unit hauling a train of 1350 tonnes entered the tunnel through the French portal, carrying out traction, braking and pantograph tests on a run to the British side of the channel, before returning to France.

The Vectron test follows a similar successful trial with an Alstom Prima II locomotive in September 2012. Eurotunnel was granted Technical Specifications for Interoperability (TSIs) for freight operations in July 2012, superseding previous rules which stated that only locomotives built specifically for operation in the Channel Tunnel can be used. With its current fleet of class 92 locomotives not accepted by French Rail Network (RFF), Eurotunnel sought the rule change to encourage freight operators to use the tunnel and increase cross-channel railfreight traffic. The current poor state of freight traffic through the tunnel was emphasised last week in Eurotunnel's 2012 results which revealed a 7% drop in railfreight volumes to 1.23 million tonnes during the year, almost its lowest level since the tunnel opened in 1994.

"The approval of new rolling stock is the necessary complement to the open-access set up by Eurotunnel," says Mr Michel Boudoussier, deputy chief executive of Eurotunnel group. "I am pleased that our close cooperation with Siemens is paving the way for new international freight traffic."